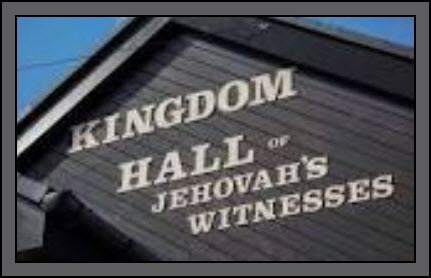 In spite of being consistently wrong:

Christ's second coming would occur in 1874

*Human governments would be overthrown in

*Abraham, Isaac and Jacob would rise from the grave in

Christ would begin on earth.

The Watchtower Society claims to be a prophet of God.

"For there are three that bear record in heaven,

the Father, the Word,

and the Holy Ghost: and these three are one."

The people now screaming their lungs out in hell sincerely believed it never existed - and they had Bible verses to prove it!"

1. It says it's God's visible representative on earth and should be obeyed as the voice of God.

2. Scripture alone is insufficient in learning the things of God according to the watchtower.

3. Without the Tower, people are incapable of getting the true meaning of Scripture.

4. People shouldn't interpret Scripture for themselves but submit their minds to the Tower.

1. God’s direction is to be found only in Scriptures and obedience given to His Word and not a bunch of "Bible vampires"- sucking on God's word for their own ends.

2. The Scriptures are complete leading to salvation and subsequent growth.

Comment: Sound familiar? If you took out the word 'Watchtower' you'd think the Roman Catholic church was being referred to. Hang on to your hats ladies and gentlemen, we're in for a bumpy ride. Yep! More domination, intimidation and manipulation by the Pharisees coming up

1. The Watchtower says that the only name by which God should be called is "Jehovah", the proper use of which is essential to salvation.

2. "Father" in the New Testament should be "Jehovah".

3. Believers should be called witnesses of Jehovah.

4. Jesus is not Jehovah according to the watchtower.

4. The following chart shows some names and attributes of Jehovah, that the Bible also uses to describe Jesus Christ.

Comment: As with all men dominators, they have their own language that you have to learn, in order to follow their seemingly deep spiritual understanding of the hidden things in Scriptures. This is why King James in 1611 ordered a version of the Bible such that the common man could read and understand.

JW's believe that Jesus was created as the archangel Michael and not begotten. They believe Jesus is a mighty god but not God and is lesser than the Father.

The Scriptures clearly show that the Father, Jesus Christ and the Holy Spirit to be all one and the same - one God yet three distinct Persons. "For there are three that bear record in heaven, the Father, the Word, and the Holy Ghost: and these three are one.” 1 John5:7

JW's say the Holy Spirit is not a person: He isn't God but God's active force.

See the above chart which shows that the Holy Spirit Is God with all His attributes and powers.

JW's say there is no Trinity - only God by Himself and Jesus is a created being and the Holy Spirit is God's active force.

THE BIBLE SAYS: "For there are three that bear record in heaven, the Father, the Word, and the Holy Ghost: and these three are one." 1John5:7

JW's believe in an "Anointed Class" of 144,000 (only these are born again) who make it to heaven, the rest will stay on paradise earth forever.

WHAT'S GOD GOT TO SAY ABOUT THIS? Jesus never said that entry was limited - whoever sought it would find it Matt 9:35-38; Mark1:14-15. “Whosoever believeth that Jesus is the Christ is born of God...”

JW's believe that salvation depends on works. Grace just gives people the opportunity to earn their salvation which comes through strict obedience to the Watchtower Society. Faith, calling on the name of Jehovah, is necessary for salvation but works must be added.

JW's believe man has no soul that survives death - he is totally annihilated at death, so hell is not a place of suffering but the common grave

"And these shall go away into everlasting

punishment: but the righteous into life eternal.

Comment: People want to pick and choose! Everyone wants eternal life but no-one wants eternal punishment, yet the Greek word (aionis) used for the words `everlasting' & `eternal' means the same thing i.e. without end and stretching out to infinity!

The people that populate hell will be the ones who never believed it existed.

2. Celebration of birthdays is forbidden.

3. No wearing of crosses.

4. Jesus was crucified on stake not a cross.

3. Worshipping a cross is idolatry not wearing one.

4. John 20:25 says "nails" (one for each hand) were used on "outstretched" arms Outstretched arms on a stake? Impossible!

Comment: How many times have you been absolutely sure that what you believed about something was true only to find out that it wasn’t? It's sad to see well intentioned sincere people like the Jehovah's Witnesses headed for the eternal Lake of Fire.

Get everything else wrong while alive - but don't get your salvation wrong! Trust in Jesus Christ alone with faith alone and no works! Everyone in hell, without exception, testifies it's real.

IF THERE IS NO ETERNAL TORMENT IN HELL, JESUS WAS A LIAR AND JUST TRIED TO PULL THE WOOL OVER OUR EYES!