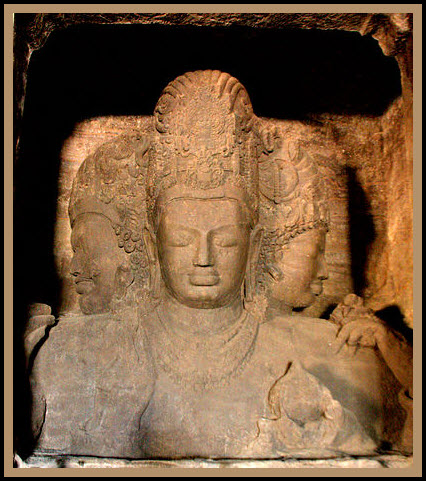 - gods for all seasons

It shouldn’t surprise us that Rome can incorporate Hinduism into the fold, for she too has many saints.

Television on the blink? St Ophthalmia is the one.

Got the sniffles? St Whoever will hear your prayer!

There is an interceding saint on hand, 24 hours a day, 7 days a week.

It is calculated that there are well over

330 million gods that Hindus can pray to. Rome has a bit of catching up to do, but she’s not far behind. This is why Rome feels that she can only be enriched by the incorporation of Hinduism into the One World Religious Ecumenical Movement.

We’ll look at the aspects of Hinduism through five headings:

and see how they stand against what God says in His word - the King James Version.

*About four hundred years before Christ, India was conquered by people (Ayrans) which had developed the Greek culture.

* Hinduism developed with lots of gods (Ayran imported and homegrown) mixed in with the various indigenous Indian traditions of meditation.

* There are three main branches:

1.    The Sikh religion attempts to unite Islam and Hinduism.

2.    Jainism is the most ancient, pre-Ayran type of Hinduism.

3.    In the West, Hinduism is represented by Advaita Vedanta which has the inmost self joining an impersonal, ultimate god.

1.    The chief of all gods is Shiva, a fierce figure who represents both the creative and destructive sides of divinity.

3.    They are all seen as manifestations of the one supreme being - Brahman. He desires the salvation of all men, but being completely above all creation, he is impersonal and uninvolved with life on earth.

4.    Because Hindu gods are not accountable to man, they have shed restraints and are often depicted with sexual imagery.

Hinduism believes the material universe is not the creation of a personal loving God but an impersonal, unconscious emanation from a removed and impersonal Brahman. It  has no beginning, no end, it’s an unreal and an illusion. Brahman is the only reality.

The universe goes in mega-cycles - being created and destroyed every 4 billion years. Mankind is also seen as having no beginning or no end but goes through and endless series of re-incarnations. All present suffering is the result of being paid back for ones karma - which is the accumulation of deeds of past lives. Any present evil will be repaid back in future lives. Hinduism does very little in the way of social welfare to alleviate the sufferings of its citizens. They play out the horror of their lives, being prisoners on a never ending “Ferris wheel” of trying to save oneself. Life is basically painful and full of distress being controlled by the supreme impersonal Brahman who is removed from people.

“What is man... thou hast made him a little lower than the angels, and hast crowned him with glory and honour...” Psalm 8:4-5

Comment: Brahman is impersonal and uncaring but the Christian God made and cares for his creation and gives man the only way out - Jesus Christ.

The only hope for the Hindu is to somehow escape this endless torture of birth, death and re-birth by dissolving somehow into the unimaginable depths of Brahman. Hindus are given 4 yogas to help them:

1.    Jnana yoga (the way of knowledge) - salvation through philosophy and the mind to grapple with the unreality of the universe.

2.    Bhakti yoga (the way of devotion or love) - salvation through the ecstatic worship of a divine being

3.    Karma yoga (the way of action) - salvation by performing personal works without thought of gain.

4.    Raja yoga (the way of the royal road) - salvation provided through meditation.

“All we like sheep have gone astray; and turned every one to his own way; and the Lord hath laid on him the iniquity of us all.” Isaiah 53:6

“... that God was in Christ, reconciling the world unto himself, not imputing their trespasses to them...”  2 Corinthians 5:19

“For God so loved the world, that he gave his only begotten son, that whosoever believeth in him should not perish, but have everlasting life.”  John 3:16

“For by grace are ye saved through faith; and that not of yourselves: it is the gift of God: Not of works, lest any man should boast ” Ephesians 2:8-9

Comment: Simple isn’t it? You can pay for your own sins or turn to Jesus and trust that he paid for them. Satan is a hard taskmaster!

It is desirable under Hinduism that as one gets older, the wants and urges of life will fade and hopefully you can renounce all worldly possessions. The pinnacle of Hinduism resides in “renouncing the fruits of your labors”. The horrors and inequalities of the Indian caste system lies in the notion of karma, which relegates the majority of people to poverty and subservience. Ingrained in the minds of all is that all human suffering is deserved.

“ I am crucified with Christ: nevertheless I live; yet not I, but Christ liveth in me ...”

Comment: I guess we can do it the hard way and in our own strength - the Hindu way, or we can get with God’s program - stop fighting Him and do it His way!

Hindus have the notion that they can acquire the necessary "spiritual brownie points" to escape their grinding wheels of re-incarnations. This is obtained by contact with all manner of holy objects and persons. Houses and villages are well stocked with holy animals of cows, monkeys and snakes and their idol representations. Rivers are thought to be holy (e.g. the Ganges) and one can improve one’s karma by bathing in them. Holy men are highly revered and serving and worshipping them will have some of their holiness ‘rub off’ and be an aid to salvation.

“Wherefore God hath also highly exalted him, and given him a name which is above every name: That at the name of Jesus every knee should bow ...and that every tongue should confess that Jesus Christ is Lord, to the glory of God the Father.”

Comment: Man! Ain’t Hinduism just plain hard work? Of course it has to be, as it’s man’s way and not God’s.

No wonder they feel right at home with the Roman Catholics and vice versa - they both have a system of good works for salvation, not knowing at the end of their life if they’ve been good enough. The Catholics, although not advocating re-incarnation as such, have their own "treading water" scenario with purgatory, whereby fire will purge out remaining sins.

The One World Ecumenical Church Movement being headed up by the Catholics have only one criteria for entry - "Be obsessed with your own internal purity!" Hinduism and Roman Catholicism (indeed Moslems, Christadelphians, Mormons, SDA’s, JW’s, and any other religion that won’t profess the blood atonement of Christ as full and sufficient to be received by faith alone) are what you can call DIY’s = "Do It Yourselfer’s".

It started back with Cain and Abel. Cain was the "Roman Catholic"- the original DIY’er getting rejected for his righteousness before God but Abel was the equivalent of the blood washed Christian and it’s been the same ever since.

Dear Friend, do you know God or should I say “Does God know you?” If you died right now where would you go? The Bible says that there are only two places when you die. “...it is appointed unto men once to die, but after this the judgment” Hebrews 9:27.

You have to admire the Hindus - so dedicated and so sincere, but sincerely wrong! I call them “Satan’s martyrs” - hell here on earth and then hell for all eternity. Little do they know that earth will be the closest thing to heaven they’ll ever know, and after this, they’ll scream forever in the Lake of Fire prepared for the devil and his angels.