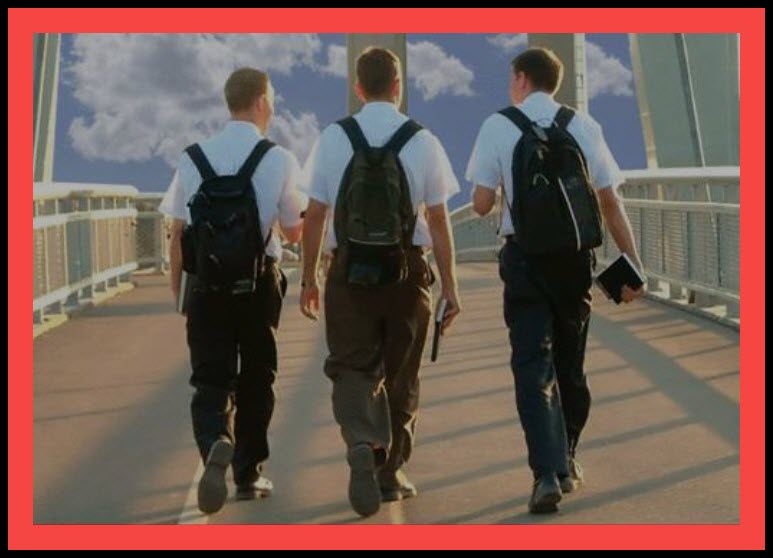 A CHURCH OF A JESUS CHRIST OF THE LATTER DAY SAINTS

He earned His salvation by good works

He was one of many gods

He is separate from God

He was a married polygamist

Mary had sex and conceived Jesus

Is this the Jesus of the King James Bible?

How can they substitute a false Christ?

How can Mormons use Christian terms but they reject the King James Bible meaning for that term?

glorified him not as God ...but became

vain in their imaginations, and their

Professing themselves to be  wise, they

became fools ...and even as they did

After the Tower of Babel about 2100BC, a group went to Central America and were destroyed by corruption.

Another group left Jerusalem around 600BC, before the Babylonian invasion and went to Peru.

These were supposedly the righteous Jews who had Jesus appear to them to give them the gospel, baptism, communion and other mystical ceremonies.

They split into two groups - The Nephites and the Lamanites (American Indians) who wiped out the Nephites. The Lamanites were then cursed with dark skin.

In 1827 Joseph Smith claimed to have dug up golden plates written in Reformed Egyptian hieroglyphics (Roman letters mixed with Greek and Hebrew) and with his Urim and Thummim spectacles, translated them into English in 1830 as the Book of Mormon.

3.     Joseph Smith dug for treasure with divining rods; immoral, polygamous and a liar.

4.     Roman letters were unknown in 570BC till centuries later when Rome became a world power in 67BC.

6.     Jews only ever wrote in Hebrew. Devout Jews would never write the name of “YHWH” in Egyptian.

7. Jeremiah contradicts the Book of Mormon by saying the only safe way to escape Nebuchadnezzar was by submitting.

8.  There are no rivers emptying into the Red Sea as stated in the book of Mormon; old men women and children couldn’t walk 175 miles from Jerusalem to the Red Sea in 3 days; 6 people then cross 1400 miles of desert and then build a ship to carry them 2/3 the way around the world in rough seas.

9.     American Indians are Mongoloids not Semites as the Book of Mormon claims.

10.   “Reformed Egyptian” has no similarity to Mayan characters.

11.    Early Americans didn’t know of metals for swords, shields, chariots to be used in wars. They were farmers.

12.   There were no great cities of population as mentioned in the Book of Mormon.

13.   There was no coinage system in Ancient America as outlined in the Book of Mormon: Why? No metal discovered    till gold was - after 600AD!

14.   Silk and fine linen never grown in America as stated in Book of Mormon.

15.   Impossible to have Nephites build synagogues (“after the manner of Solomon”) in America. Why? They’d left     before the first one was built in Jerusalem. They wouldn’t have known how to build one or what it looked like. They also wouldn’t have the number of workers required - hundreds of thousands. Nephi had 12 adults. Why have a temple built for several millions of worshippers for only 20 people?

16.   Quetzalcoatl (The Feathered Serpent) is equated with Jesus. Can’t be, why? It appeared 1000 years after Jesus. There is no evidence to say that Jesus went to America.

17.   The Book of Mormon mistakes Christ’s crucifixion as 3 days rather than 3 hours.

18.    Joseph Smith claimed that Elijah (OT) and Elias (NT) were different people. They are the same person.

19.   The Book of Mormon has Jesus being born at Jerusalem not Bethlehem.

23.   Joseph Smith’s Book of Abraham found to be a complete fraud.

25.   The 3 witnesses that appear in the front of the Book of Mormon later became thieves and counterfeiters.

3.     Jesus Christ: A man who progressed to become a god; a created being; earned his salvation by good works; one of many gods; conceived by physical sex; had a lot of wives. (All heresies)

8.     Atonement: the way for an individual to earn their own salvation. (heresy)

9.     True salvation: Being exalted to a god to rule and sexual procreation of spirit children (heresy)

10.   Eternal life and redemption: Being saved by good works. (heresy)

11.   Heaven: there are three kingdoms of glory (heresy)

13.   The Scriptures: Book of Mormon, Doctrines and Covenants, Pearl of Great Price and the KJV as far as it is correctly translated.

2.     What does your conscience and common sense tell you when you understand the 27 monumental blunders previously cited and 13 false definitions given above?

3.     Does it worry you that the supposedly perfect Book of Mormon underwent major changes and 3000 minor ones since 1830?

5.     Why has no archeological evidence ever been found to support the Book of Mormon’s alleged cities, persons, silk, coins, metals, wars, weapons, kings or palaces in North or South America?
Prominent Mormon archeologist T. S. Ferguson quit the Mormon church because of the weight of archeological evidence against Mormonism. The Bureau of American Ethnology writes: “There is no evidence whatever of any migration from Israel to America.”

6.     How do you explain the plagiarism in the Book of Mormon taken from Ethan Smith’s “View of the Hebrews” (1823), a book that was available to Joseph Smith?

7.     Why does the Book of Mormon contradict and conflict with hundreds of truths in the Bible?

9.     Does it worry you that the Book of Mormon was translated by occult means?

10.   Why after 25 years has the Mormon church never responded or answered to Jerald and Sandra Tanner’s research? (Write to them at: Utah Lighthouse Ministry, Box 1884, Salt Lake City, Utah, 84110.)

11.   Why is it that even the highest Mormons don’t know where they’ll go when they die?

12.   If you died tonight, do you know 100% for sure that you would go to be with Jesus Christ forever in heaven?

“Dear Lord, I’m a sinner and deserve nothing but your wrath in hell forever. I repent of my involvement in Mormonism as a false religion. Please forgive me of my sins. I believe that Jesus died for my sins - no more to pay!

Thank you God for saving me.”

The above paper and points have been a summary from Keith Piper’s excellent book “Answers”. He can be contacted at: P.O. Box 188, Cherrybrook, NSW, 2126, Australia.