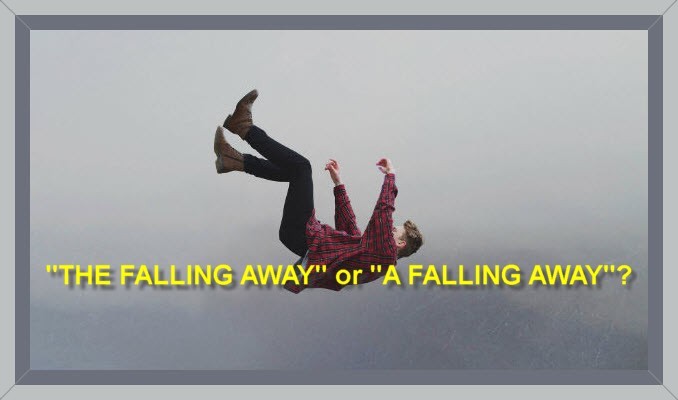 ANSWER: “a falling away”. THE KING JAMES BIBLE IS ALWAYS CORRECT

Throughout time, there have been many ‘falling aways’ by God’s people.

In the Book of Jude, we have a mention of falling “Now unto him that is able to keep you from falling, and to present you faultless before the presence of his glory with exceeding joy,” (Jude 1:24 King James Bible).

FALLING FROM WHAT?
Falling away from the faith. Jude says to “…earnestly contend for the faith…” (Jud 1:3).

In the Old Testament, God’s own man, Solomon, was throwing his babies into the fire and burning them to death. Would this be a falling away?

Yes. However in God’s eyes this practice could be a case of “the falling away”, would it not? This monstrous and abhorrent practice of sacrificing babies should be called ‘the falling away’ from the faith, not just another garden variety of “a falling away”.

So, in these latter days, supposing we had Christian churches sacrificing babies into fires, just before the rapture, we could rightly call this time, ‘the falling away’, but until that time, God merely sees the plight of the modern Christian church as perhaps simply another ‘falling away’ – a falling away. It’s almost like “Yawn! Here we go again! Another falling away! Just one of many!”

But in God’s eyes the Christian church today has become so dumbed down that it is falling away – one of many.

The world has never fallen away – they have always been lost! But we do not put our own emphasis on Gods’ words, by calling it the falling away.

It’s as if God has had enough, and ‘wearily’ shakes his head as if to say “OK, time is up. Ho! Hum! Another ‘falling away’! I’ve seen bigger and more destructive ‘falling aways’. This is just another one. I’ve had enough!

Let’s get on with the programme! Right! What’s next? Oh Goodo! The rapture and then the seven years of Tribulation.”