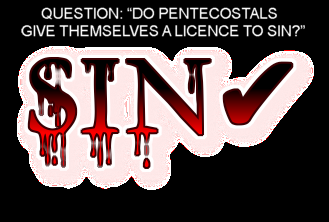 QUESTION: “DO PENTECOSTALS GIVE THEMSELVES A LICENCE TO SIN?”

I was preaching on the street the other day, when man came up and struck up a conversation with me. Here’s the essence of the conversation.

Dear Reader for your information, the boards have written on them the following –

Board #4
“Believe on the Lord Jesus Christ and thou shalt be saved… in whom we have redemption, through his blood the forgiveness of sins …” (Acts 16:31; Ephesians 1:7)

HIM: “Yes, I used to go to a Pentecostal church on the North side … but I fell from grace.”

HIM: “Ah … I don’t want to go into that, but God’s grace is all encompassing and forgiving.” ME: “Oh? What line of work are you in at the moment?”

ME: “What’s a hustler? Do you have to con people and lie to them and stuff like that?”

ME: “Tell me more about this falling from grace. Are you still in this state? You seem reluctant to tell me what it was?”

HIM: “Look, forget about sins, it’s all about God’s grace. He’s the creator of the universe, it’s Jesus Christ, he died for all our sins, past present and future. I’m saved!

ME: “Do you have eternal security? Never to be lost?”

ME: “Did you have to have water baptism to get saved?”

ME: “How about afterwards?”

So here I was confronted with a man, assuring me he was saved, but not worrying about sin, sins or sinning in the future.

He had to go, and I said for him to pop back whenever he was in town.

But he got me thinking …

This was lining up with other conversations and observations I’d had with other Pentys.  Sin and sinning were not an issue for them, you know, things like not having a husband or a wife, but ‘shacking up’ with their partners for biological relief.
They say a piece of paper of marriage is not necessary but a commitment for fidelity to that partner for as long as they are together.
So serial fornication, that is one partner after another, was not a sin.
Then it dawned on me they ignore Paul’s injunctions of becoming weak, sickly and falling asleep, because they will not judge themselves. No wonder physical healing is a priority for them!

1.“They wrongly think they are free from the law, that is, the law has no more influence or control over them.”

2. Furthermore, having been saved, that is if they are, they wrongly assume they should be sinless.

3. But if sin troubles them, it can only be Satan attacking them … it’s not their own flesh that’s doing it.

4. Finally, if it is their flesh, all they have to do is keep getting ‘purged and baptized’ with the Holy Ghost … you know like wallowing around in a big spiritual bath tub, so that sin will automatically be burned out of them… or drowned.

SO DO PENTY’S GIVE THEMSELVES A LICENCE TO SIN?

OF COURSE THEY DO! YES!

They ignore Paul’s letters to the churches which are all about laws for living the Christian life as he has the commandments of God also (1Cor 14:37).

Paul says “Now you are saved, there are laws for Christian obedience if you love Jesus Christ.”

But like little children in the sand pit, and ignoring the advice of Paul, the ongoing problem of sin gets too hard for the Penty’s.

AND THAT’S WHY THIS FELLOW, THE EX-PENTECOSTAL, IN EXASPERATION SAID

“IF ALL MY SINS HAVE BEEN PAID FOR, I’M JUST GOING TO DWELL ON THE GRACE OF GOD.”

Dear Reader, by now it must have dawned on you, that when you hear these words from a Penty, they are code words for the following:

“I’M GOING TO HEAVEN AND THAT’S GOOD ENOUGH FOR ME. I’M JUST GOING TO IGNORE THIS LABEL OF SIN AND JUST ENJOY MY GRACE FREEDOM!”

Dear Reader, you may find all this too hard to believe. But this is pretty standard for Penty’s.

Their mantra? “Let’s focus on grace not sin.”

You just have to shake your head about THE ‘WE ARE FREE FROM ALL RESTRAINTS’ DOCTRINE OF THE PENTYS. It’s also known as “GOD’S GRACE WILL DROWN OUT SIN”.

It’s no wonder they have such a big emphasis on physical healing because they won’t judge themselves (1Cor 11).

They stumble most grievously – yes, they are FREE but only from the curse of the law that demands perfection in order to be saved.

THERE ARE TWO BLASPHEMOUS GRACE DOCTRINES

1. The Penty’s – as above
2. The grace doctrine of Calvinists

Today, no-one calls themselves a Calvinist.
Having been discovered as Calvinists, they have changed their name to “Believers in the Doctrine of Grace”.
But as it is well known “Once a Calvinist – always a Calvinist!”
A wig, a nice dress and a bit of lipstick can’t disguise the heart.