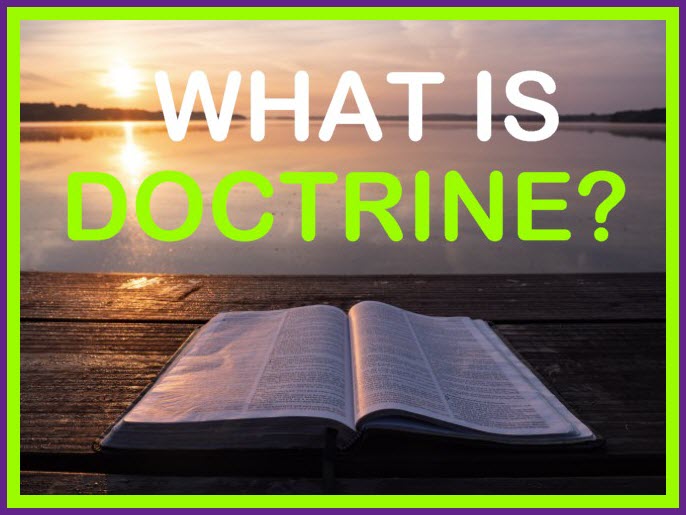 The other day, I was talking to an older gentleman who has been a Christian for most of his life, but he didn’t know what the word ‘doctrine’ meant.

He kept on saying “What is it?” despite my attempts to tell him.

LIKES AND DISLIKES
Now there are things like preferences, likes and dislikes but these aren’t doctrine.

For example in a restaurant, the waiter says to you

“Would you like the cheese or herb tomato sauce on your spaghetti?”

One athlete says to another

“Do you prefer green or yellow running shoes?”

One camper says to another

“Do you like to wake up to a sunny morning or a cloudy one?”

Generally speaking these are not things that you would live or die for (or maybe some people would?). There was an Earl in the 18th century in England, who died from a heart attack when one of his many servants told him he had a hole in one of his socks.

LAODICEAN CHURCH AGE
One of the characteristics of this last church age we find ourselves in, is the inability to endure sound doctrine (2Tim 4:3).

As the leaky ship “DIFFERENT ‘BIBLE’ VERSIONS” sails off over the doctrinal cliff, we are not to be surprised, as they extracted the very word “doctrine” in scores of places.

Using ‘the pea under the cup routine’ we find the substitution for the word “DOCTRINE” to be the word “TEACHING”.

Doctrines are rock solid statements of belief that are religious things a person believes in. These are beliefs that one stakes one’s life upon. People aren’t burnt at the stake for eating bananas. No, great men of God died for refusing to renounce that the Roman Catholic mass was the actual body of Jesus. This is doctrine.

We have never heard an executioner about to light the faggots at the stake, saying to the victim “For the last time, will you give up eating lamingtons with cream and jam?”

DOCTRINES ARE THE TENETS OR BELIEFS THAT APPEAR IN CREEDS
It’s similar to the Apostles Creed which was formulated to distinguish between Christianity and other religions.

Teaching, on the other hand, is about what anyone can learn like water polo, maths, reading, boxing, aerobics and car mechanics.

Bible Teaching is much more about general knowledge and is changed to suit different Bible versions and different interpretations and preferences.

Doctrine goes deeper to our core beliefs on how to live the Christian life.

There are hundreds of Technical and Further Education courses that you can enrol in to be taught and expand your knowledge.

HOW DID THIS HAPPEN?
First of all, you need a Bible that gets rid of the following …

SO WHO FALLS FOR THIS SATANIC DECEPTION?
We are not talking about Humanists, Evolutionists, Unsaved, the Ecumenical Movement, Liberals, Modernists, Romans Catholics, SDA’s or Mormons.

No. it is the saved, the Christian, who once upon a time, knew sound doctrine when they heard it, but rejected it because it upset their ‘apple cart’.

They just didn’t like it or they couldn’t understand it … much like the fellow mentioned at the start of this article.

I believe it actually HURTS THEIR BRAINS to be conformed to sound and proper doctrine.

Their preferences are internet preachers, popular theologians or best-selling authors, you can easily pick up at any Christian Book Store.

And don’t take my word for it.