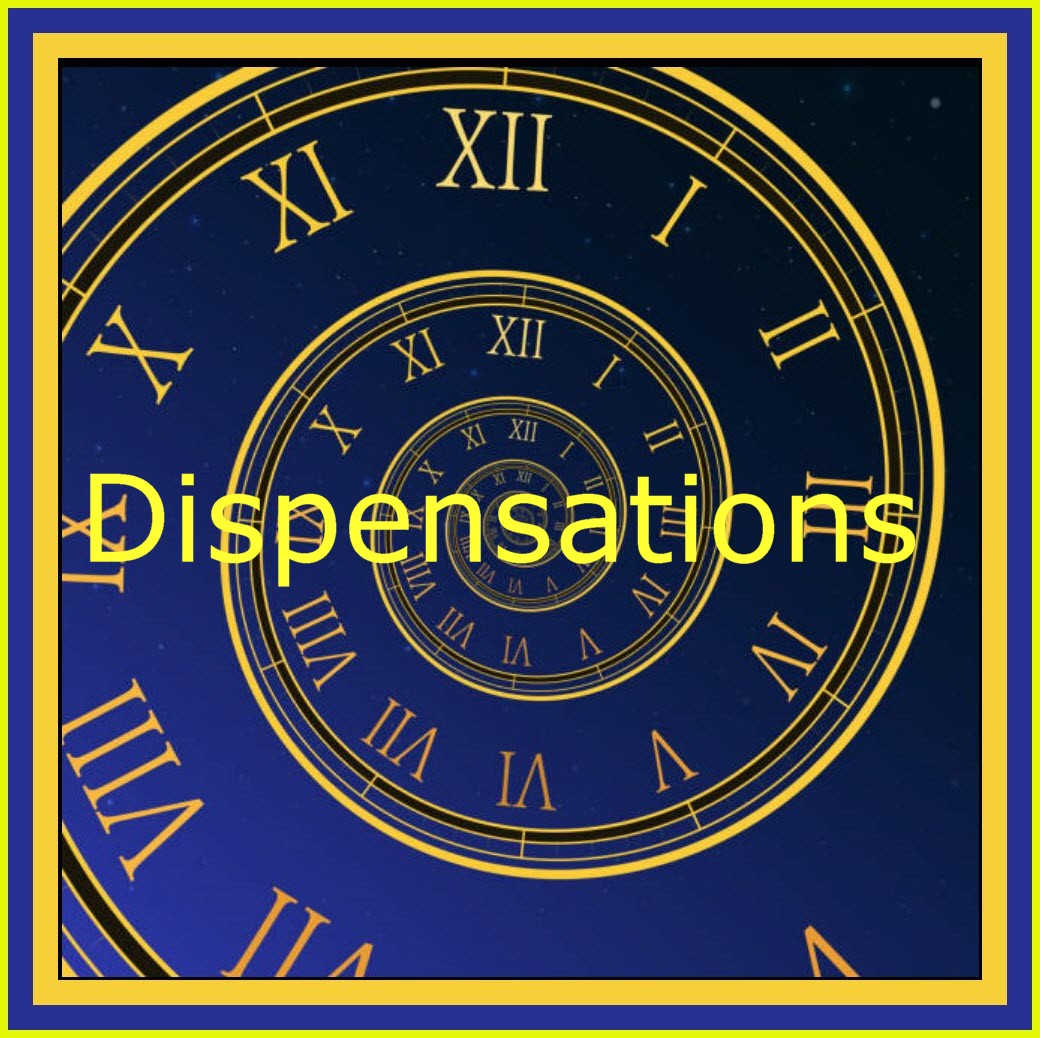 What is a DISPENSATION? A dispensary used to be attached to a doctor’s medical practice and when the diagnosis was given, like “You have the flu”, the doctor would recommend and dispense (give) some medicine to the patient. If the patient had a wound that had become infected, the doctor would dispense and give the patient something else. Different patients with different problems got different treatments. You can see then, that it would be no good giving a patient with a broken leg some hand cream for a rash.

So today, the chemist or the pharmacist is the place where medicines are dispensed or given out with appropriate instructions. It’s no good for the patient to be given some antibiotic tablets to be taken ‘three times a day’ if the patient decides to only take one tablet every week.

This what God does. God has, and is, the Divine Dispensary giving out the dispensations to man.

Over DIFFERENT TIME PERIODS TO DIFFERENT MEN, God DISPENSES INSTRUCTIONS on what he wants that particular group to do. Each dispensation ends in complete disaster and failure.

The Garden of Eden

Adam in the garden of Eden. God said “Adam you are sinless, and I want you to stay that way. I want you to live forever on the earth. So I don’t want you to eat of the fruit of the knowledge of good and evil. If you do, you will die.” Adam disobeyed God and sinned. (Here is a simple definition for sin - it is disobeying God.)

What was God testing? Obedience! And this has been man’s problem ever since.

THE RESULT? God’s judgment! God casts Adam out of the garden

Eden to the Flood

God puts up with the sin of the world till it got to much for him. The scriptures say And GOD saw that the wickedness of man was great in the earth, and that every imagination of the thoughts of his heart was only evil continually.
Genesis 6:5. Total disobedience and massive sinning.

The world knows about God, the garden of Eden, disobedience, sin and the flood. But they disobeyed God and set about building the tower of Babel. And the whole earth was of one language, and of one speech. Genesis 11:1 such that they said, Go to, let us build us a city and a tower, whose top may reach unto heaven; and let us make us a name, lest we be scattered abroad upon the face of the whole earth. Genesis 11:4. But the LORD said Behold, the people is one, and they have all one language; and this they begin to do: and now nothing will be restrained (held back) from them, which they have imagined to do. Go to, let us go down, and there confound (confuse) their language, that they may not understand one another's speech. So the LORD scattered them abroad … upon the face of all the earth: and they left off to build the city. Genesis 11:6-7.

Abraham to the Exodus

This time he chooses Abraham to be the father of the Hebrew nation. Famine hits the land, but Abraham disobeys God, Abraham’s family go down to Egypt for food.

God gives his laws on Mt Sinai (Arabia). The Jews murmur, fornicate, lust and tempt the Lord so he lets them wander the desert for forty years, after which they enter Canaan. They disobey God and don’t wipe out the heathen nations. Furthermore, they want judges to rule over them to be like other nations. God says to Samuel the prophet … for they have not rejected thee, but they have rejected me, that I should not reign over them. 1 Samuel 8:7

THE RESULT? God judgment! He gives Israel kings and this ends up in absolute disaster – Saul, David, Solomon plus 19 kings each to both North and South.  They both end up captive to Assyria and Babylon.

The Southern tribes return from Babylon but will not obey the Lord and rebuild the temple and the wall. They eventually do though. But God has had enough.

THE RESULT? God judgment! God is silent. He stops sending prophets to Israel for 400 years.

Christ the Messiah comes exclusively for the Jew.

He tells them they can have heaven on earth (kingdom of heaven) and he gives them the set of rules. These rules are the Sermon on the Mount (Matthew 5-7). Christ says But if ye forgive not men their trespasses, neither will your Father forgive your trespasses. Matthew 6:15. These are extremely strict rules that no-one can keep. But Christ tells them that if they would continuously believe he was fulfilling these rules on their behalf, while continuing to go to the temple for their usual blood sacrifices for the remission of past sins, they would go to Abraham’s bosom when they die. But they will not believe, and so they crucify Christ.

THE RESULT? God’s judgment!. God puts them aside for 2,000 years to be persecuted by the world. Now God allows the world to have even ‘easier’ salvation. By works? No. Christ fulfilled the works of the law. We now have direct entry into the kingdom of God in heaven by Christ’s perfect works. No waiting in Abraham’s bosom. Do we still need blood for sin? Yes! It is the perfect shed blood of Christ and not the on-going daily animal sacrifices as … there remaineth no more sacrifice for sins, Hebrews 10:26 because For by one offering he hath perfected for ever them that are sanctified. Hebrews 10:14.

At Pentecost, Peter preaches to the men of Israel with the following Repent, and be baptized (water) every one of you in the name of Jesus Christ for the remission of sins (remission is for sins that are past Rom 3:25) and ye shall receive the gift of the Holy Ghost.
Acts 2:38.

Now the nation of Jews as a whole disobey what God wants.

THE RESULT? God’s judgment! He puts them aside.

NOTE: These are not the salvation instructions for today.

1. We do not need water baptism to be saved. Paul said For Christ sent me not to baptize, but to preach the gospel: … lest the cross of Christ should be made of none effect.
1 Corinthians 1:17

God chooses Paul and a dispensation of the gospel is given to Paul (1Corinthians 9:17).

God makes it extremely simple for anyone to get saved today. You don’t need faith. You need simply believe the facts like the jailer. What does it mean to believe? It means to be ‘fully persuaded’ (Romans 4:20-21). It’s the easiest time since creation to be saved. It’s not of works as all the work has been done. (Eph 2:8-9).

THE RESULT? God’s judgment! He sends them to hell.

10. SO GOD STARTS AGAIN! (coming up in the future)

After the rapture, there will not be one Christian on earth for seven years. This will be a Jewish time or dispensation. This means you can lose your salvation. It is also called Daniel’s 70th week (Daniel 9:27). It is called the time of the seven year tribulation. God’s instructions to man is to not to take the mark. If you do, you will go to hell (Revelation 14:11).

THE RESULT? God’s judgment! Those who take the mark go to hell.

Christ rules and reigns for 1,000 years with a rod of iron (Revelation 19:15). He demands strict, outward and 100% obedience. It is a time of works. People disobey.

THE RESULT? God’s judgment! Disobedience sends them to hell (Rev 19:15)

This will be the new everlasting heaven and new earth. A new universe without sin.

Getting into heaven has always been by perfect obedient works – CHRIST’S PERFECT WORKS.

For disobedience, getting right (atonement) with God, has always been by blood.

Today, in this dispensation, we have Christ’s perfect works and his perfect blood.

In this dispensation, what are God’s instructions for you and me?

It’s never been easier – “BELIEVE on the Lord Jesus Christ and thou shalt be saved.

Heresies are the result of not recognizing, at least, the twelve dispensations