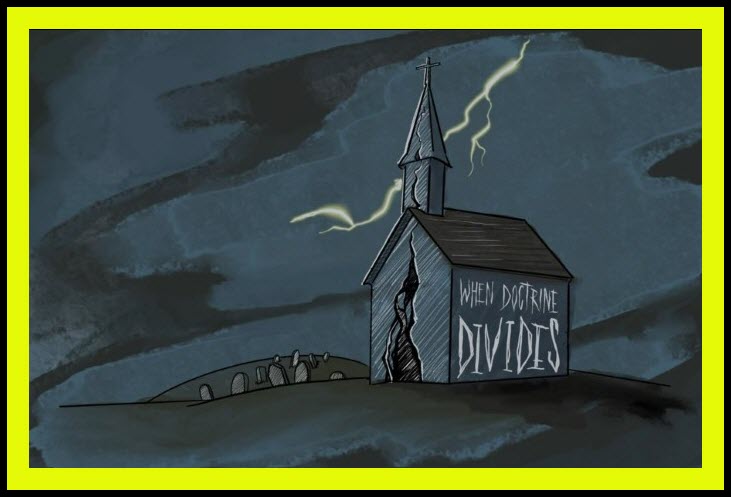 Dear Reader, did you know that …

DOCTRINE DIVIDES!Ever heard this phrase? I’m sure you have.

It’s generally uttered by those looking for the lowest common denominator.

Phrases and platitudes such as “Look, we all love Jesus, let’s just concentrate on preaching him!” or “Don’t let your denomination get in the way!” or “It’s the basics that are important!”

Now, the problem is of course, that upon questioning, these people have a different Jesus than that of the Bible eg “There isn’t enough blood to go around!” (Calvinists) or “His blood is just like animal blood, you know, not strong enough to give you eternal security!” (loss of salvation) or “Water baptism is a must!” (Paul says “Believe’)


The phrase, “Doctrine divides”, is generally uttered by ‘do-gooders’ seeking to maintain unity, but going about it contrary to what God clearly states.

You see, God has said one thing, but these people want to re-write the Bible and say “Let’s disobey God and ignore what he has written. Let’s write our own Bible!”

Well, what has God written?

“Now I beseech you, brethren, by the name of our Lord Jesus Christ, that ye all SPEAK THE SAME THING, and that there be NO DIVISIONS AMONG YOU; but that ye be PERFECTLY JOINED TOGETHER in the SAME MIND and in the SAME JUDGMENT.” (1 Cor 1:10)

“A man that is an heretick after the first and second admonition REJECT;” (Titus 3:10))

“Now I beseech you, brethren, MARK THEM WHICH CAUSE DIVISIONS and offences CONTRARY TO THE DOCTRINE which ye have learned; and AVOID THEM.” (Rom 16:17)

To which these people respond by saying “Oh, but that’s just Paul.”

Was Paul being an egotistical lunatic or liar, or was he giving us God’s actual words?

How important is doctrine then?

“Till I come, give attendance to reading, to exhortation, to doctrine.”

“Take heed unto thyself, and unto the doctrine; continue in them: …

“Let the elders that rule well be counted worthy of double honour, especially they who labour in the word and doctrine.” (1 Tim 5:17)

“All scripture is given by inspiration of God, and is profitable for doctrine, for reproof, for correction, for instruction in righteousness:” (2Tim 3:16 )

“… reprove, rebuke, exhort with all longsuffering and doctrine.”(2Tim 4:2)

“…that he may be able by sound doctrine both to exhort and to convince the gainsayers.” (Titus 1:9)

“But speak thou the things which become sound doctrine:” (Titus 2:1)

God seems to think that Paul’s doctrine is of paramount importance.

There was nothing wrong with Paul, he’s only giving you God’s words.

What is fellowship then?

direction by believing the same things.

God wants us to have fellowship with people who believe Paul’s doctrine.

It’s not the Bible study where people say “Well, my Bible says this.” or “That’s just your interpretation!” or “Let’s agree to disagree!” or “I believe this!”

Dear Reader, do you realize it doesn’t matter what you believe?

It’s what God has said and written down.

What should you do?

Heard of the phrase “Birds of a feather, fly together”?

As a Christian, get your doctrine from the apostle Paul.

Yes dear reader, doctrine divides, it should divide and God wants it to divide “… that they which are approved may be made manifest among you.”

Check it out for yourself.