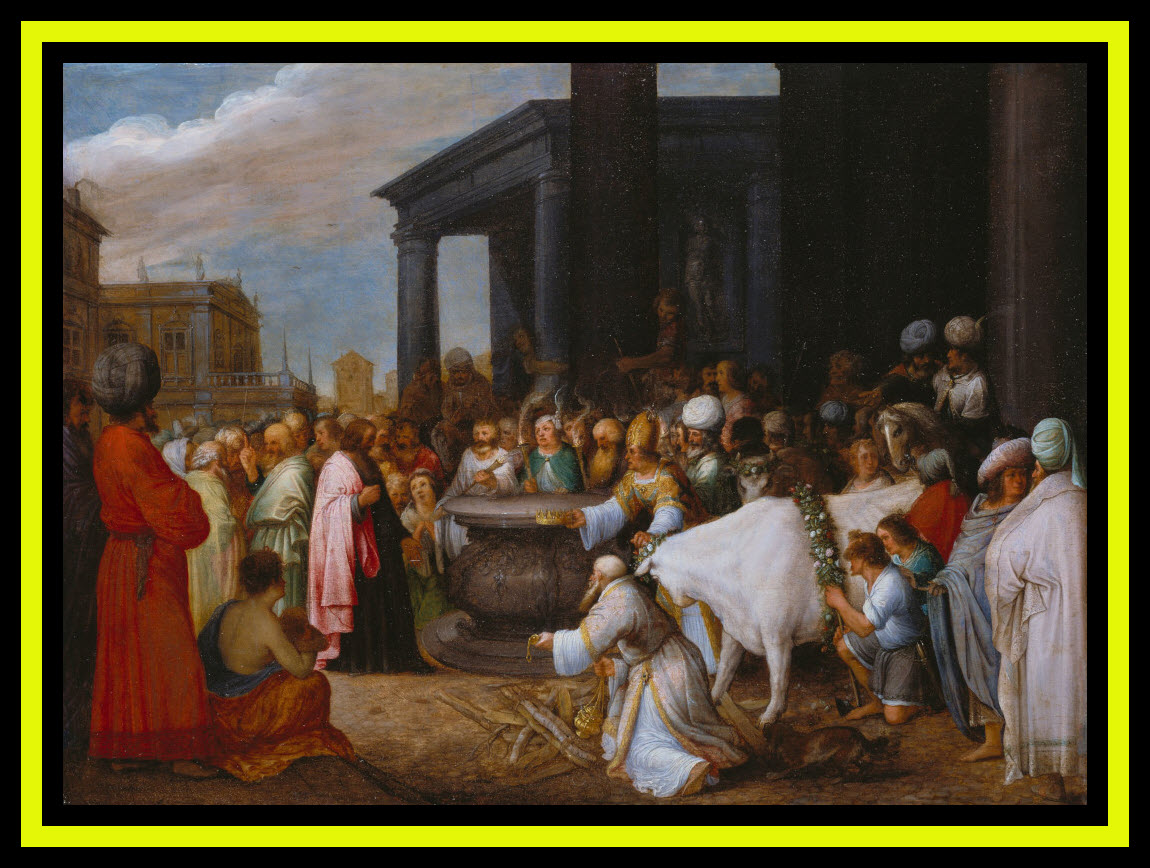 BULLSEYE!
ACCURATE BIBLE KNOWLEDGE!
“IS IT JUPITER and MERCURIUS or ZEUS and HERMES?”
(Acts 14:12)

QUESTION: The King James Bible has “Jupiter and Mercurius” as gods (Acts 14:12). The New King James Version has “Zeus” and “Hermes”. Which is correct?
ANSWER: ALWAYS the King James Bible.EXPLANATION:
Jesus, when tempted in the desert could have easily said “Now look here Satan, don’t you know who I am? I am God who created the heaven and the earth; I created you as Lucifer; I am Almighty God manifest in the flesh; I could snuff you out in a nano-second if I wanted! All power is given me in heaven and earth!”

But he didn’t. Christ simply used the scriptures as his choice of weapon against Satan. It is no wonder the Satan will do anything to discredit God’s holy words of The King James Bible. Satan has a vehement hatred that cannot be extinguished, toward the Word (1John 5:7-8) and his perfect words of the Authorized Bible, being The King James Bible. So Satan’s servant, Rome, produced the New King James Version.

In particular, we look at the following:

It is on Paul’s 1st trip, between 45-48AD, that he and Barnabas visit Lystra, and are called by the names of Jupiter and Mercurius, the gods of Rome. Rome worshipped Jupiter as the supreme chief of gods, and with Barnabas being older than Paul, he was given that title. Paul, having the gift of speaking, was given the title Mercurius, being the interpreter and messenger.
So Rome’s bible, the New King James Version would have us believe, that after, approximately 75 years under Roman rule, the city of Lystra still worshipped the Greek gods of Zeus and Hermes and not Rome’s gods? Hardly!
Firstly, why would Rome’s bible, the New King James Version a.k.a Rome’s bible for the unsuspecting Christian, cover up and hide, the worship of their own gods, with the worship of the Greek gods? The answer lies with the accusations of Paul and Barnabas. Paul and Barnabas were literally tearing their clothes and crying out “…ye should turn from these vanities unto the living God, which made heaven, and earth, and the sea, and all things that are therein:” (Acts 14:15). Rome, not wanting to be accused of worshipping the vanities of Jupiter and Mercurius, quietly substitute a couple of Greek gods to take the blame. “Oh yes” says Rome “look at those pagan and nasty people of Lystra worshipping those pagan vanities of Zeus and Hermes! They are not our gods!”. The New King James Version lets Rome off the hook.
Secondly, why would the Roman city of Lystra be worshipping the superseded Greek gods of Zeus and Hermes, when the city of Lystra had an imposing and formidable statue of Jupiter himself, the guardian god of Lystra, seated on a chair, right in the front of the city, with a winged cap with the name of “MERCURY”, not Hermes, on his head, and the inscription of “Jupiter Custos”, meaning “Jupiter Keeper and Guardian”, imprinted right on him? They wouldn’t.
Thirdly, we come to the city of Ephesus, which Paul visits on his 3rd trip between 54-58AD.

Now the city of Ephesus, apart from Rome, was the backbone of the Roman Empire, and with a population of around 225,000, was at the centre of the Imperial Highway from Rome to the East, and was indeed, the commercial centre of all Asia. The city was also at the approximate geographic centre of the Roman Empire.  The temple of Diana, 425 feet long and 220 feet wide with 127 columns, taking over 20 years to complete, some say more, and being made of pure marble, was one of the Seven Wonders of the world.

The New King James Version brazenly and wrongly states, that in this bastion of Roman culture, geography, commerce and religion, that the men of Ephesus roared for two hours “… cried out, saying, Great is Diana of the Ephesians.” (Acts 19:28). Were they ‘going off their brains’ and frothing at the mouth, over some 3rd rate mythological deity called Zeus, from a town in Greece? Hardly! Once again, Rome wanting to avoid the accusation they worshipped the Roman Diana, the many-breasted fertility goddess of the state, that sanctioned vice, prostitution and gross immorality, substitute the Greek god of Zeus to take the blame.

ARE WE TO BE SURPRISED WITH THIS SWITCH?
Hardly! This is what Rome did (two chapters earlier in Acts 12:4) with substituting the Jewish word “Passover” to take the place of the Roman word “Easter”, in order to remove itself from the scene, and therefore not be accused, of wanting to kill its own ‘pope’. What better way to minimize blame, than to bring out Peter during the Jewish time of their celebration.

Rome has produced their own Bible for willingly ignorant Christians, which is firmly based on their own corrupted Alexandrian manuscripts, and called it the New King James Version. With an incredible stealth  and deception (“slowly, slowly, but above all not too much zeal”) they have wheeled in a ‘Trojan horse’ in the form of the New King James Version, thereby deceiving good, godly and sincere but willingly ignorant Christians.