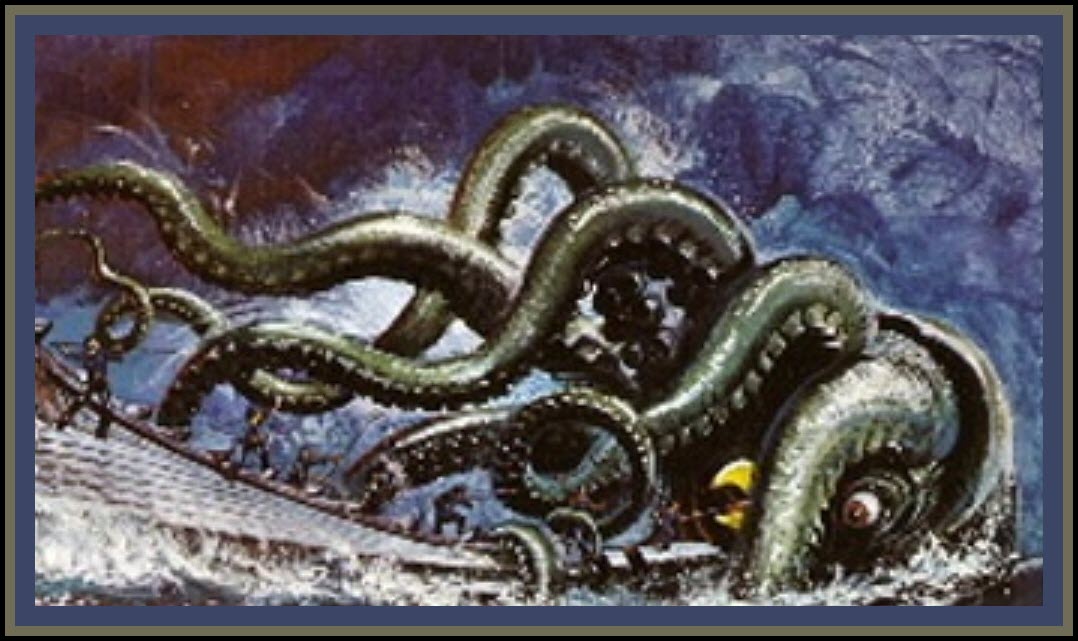 STUDY THE BIBLE 69s  (STB-69s)
DID THE OT SAINTS HAVE ETERNAL SECURITY?

It has been said that all error and heresy comes from misunderstanding the blood. Like the tentacles of an octopus, many preachers and teachers in the past, have combated heresy by attempting to cut off the tentacles of heresy eg Mormonism, Roman Catholicism, Buddhism, Hinduism, Seventh Day Adventism and all the other “-isms”, BUT THEY HAVE IGNORED the ink sac in the head of the octopus labelled “THE IGNORANCE OF SHED BLOOD OF THE LORD JESUS CHRIST.”

Dear Reader, please don’t get me wrong - this approach produces results! For example, we’ve all seen the two columns concerning Hinduism. The first column has “What the Hindus believe” and the second column has “What the Christian Believes”. Fantastic! Great! Worthwhile! But this is only one way the Christian can start to learn his Bible and actually find out what he believes by seeing the error in all the other religions.

Now, within the broad Christian denominational framework eg Methodists, Presbyterians, Baptists and so on, delineation and detection, starts to get a little bit finer. For example, one of the founders of Methodism, John Wesley, would never preach anything but the shed blood to get saved with water baptism nowhere to be seen. However while strong on the blood to get saved, the Methodists believed you could lose it. Presbyterians, coming from the reformed angle, said you couldn’t. However, the error that popped up for the Presbyterian, was the satanic heresy of Calvinism, which said that free will was an anathema and that man could only get saved if God had selected you.

The writer of this tract, knows a lady whose husband is teetering on the brink of hell, but praying for his salvation would be useless, because believing Calvin, she thinks God has already selected him to be saved before the foundations of the world or he hasn’t.

To their credit however, Baptists, have tended to steer clear of this ‘salvation selection lotto’, in that God has given man a free will. But because of other errors in Baptist doctrine, Calvinism is now creeping into Baptist Churches everywhere.

Within Baptist circles, Independent Baptists are separate from the Baptist Union. Bible Baptists are separate again and are divided into King James Bible users and those that believe it is the inspired, inerrant, infallible words of God. Now, Satan being the master of deception, sits down and has a little think to himself. “Now Your Satanic Cleverness,” he says to himself, “how can we introduce error into the various religions? Mmmm! I know, I’ll get them to misunderstand the blood! Let’s see - 1. The Mohammedans are OK – they don’t have anything to do with Jesus and his blood. 2. I’ve got the Jew because Jesus, for them, hasn’t come yet and they are still fiddling around with animals blood 3. The Romans Catholics believe that the priest can say ‘hocus pocus’ and change the grape juice into the actual blood of Jesus 4. The historical Lutherans aren’t much better, in that while they don’t believe it is the actual blood of Jesus like the Catholics, it still has his presence in it. 5. With the Methodists I’ve done a good job, because they believe that Jesus blood can get you saved but it can’t give you eternal security 6. I’ve got the Presbyterians believing Jesus couldn’t shed his blood for the whole world 7. The Hindus, Bahais are no trouble because they’re off with the fairies 8. The Mormons use a type of Jesus’ blood as a starter motor in a car, you know, it’s no longer useful after the journey begins 8. But I got to tell you, these Bible believing Baptists, you know, the ones that actually believe the 1611 AV – man! They are a real problem. How can I feed them error??!!

A MEETING BETWEEN SATAN AND HIS DEVILS
So Satan has a Bex (a headache pain tablet) and a cup of tea, gives himself an uppercut (a boxing term and used as an Australian idiom for clearing the head; getting rid of the cobwebs in the brain; coming to your senses; getting your head straight; being slapped in the face to bring a person back to reality … and so on) and goes and has a good lie down. He suddenly wakes up! That’s it! Boing! Ding! The light goes on!

“Throw in the one about Abraham seeing the day of Jesus,” added one of his devils excitedly.

“Very good, little minion” replied Satan, “In fact, I’ll get them believing Abraham saw Jesus, not just his day. You know, a Prophet will come and all that.”

“But won’t they see the verse which says “For the life of the flesh is in the blood: and I have given it to you upon the altar to make an atonement for your souls: for it is the blood that maketh an atonement for the soul?” (Lev 17:11)

“I know that grasshopper!” scowled Satan “that’s why they had to keep sacrificing animals, you fool! Any numbskull knows that!”

“Furthermore, you small, insignificant and germy little grasshopper, they won’t be able to see that Korah and his little merry band of party crashers, went straight down to hell!”

“But your Evilness, weren’t Jews covered by the blood? Didn’t God just send them to Abraham’s bosom, to be picked up eventually by Jesus and then taken to heaven? Doesn’t it just mean that when “…the earth opened her mouth, and swallowed them up, and their houses, and all the men that appertained unto Korah, and all their goods. They, and all that appertained to them, went down alive into the pit, and the earth closed upon them: and they perished from among the congregation…” (Num 16:32-33) they went down alive into Abraham’s bosom?”

“You imbecilic, giant, steaming nit, don’t you read your Bible anymore!? Does this sound like a loving act of God that “…all Israel that were round about them fled at the cry of them: for they said, Lest the earth swallow us up also. And there came out a fire from the LORD, and consumed the two hundred and fifty men that offered incense.” (Num 16:34-35)

“But surely your Hatefulness, weren’t the Jews covered by animals’ blood? Weren’t they promised Abrahams’ bosom when they died?”

“Dearest Pea Brain, where oh where, please tell me, does it ever say that in the Bible? Oh monstrous Buffoon, they never had any eternal security being covered by animals blood! Pure lambs’ blood was physical, albeit as sinless as you could get, but it could not wash away their sins as it was temporary only!!! Jesus Christ had not died! They didn’t know about Jesus Christ! Jesus Christ had not shed his blood! People could not have their sins washed away and be put into the death of Jesus and have eternal security! Their consciences could not be purged!

Dear O Dear O Deary me! It’s a thankless task educating all you stupid devils! Does this sound like Israel, covered with animals’ blood, had eternal security when God says to them? “…for thou hast discovered thyself to another than me, and art gone up; thou hast enlarged thy bed, and made thee a covenant with them; thou lovedst their bed where thou sawest it. … and didst send thy messengers far off, and DIDST DEBASE THYSELF EVEN UNTO HELL. (Is 57:8-9)” And again you Dills: “And they shall go forth, and look upon the carcases of the men that have transgressed against me: for their worm shall not die, NEITHER SHALL THEIR FIRE BE QUENCHED; and they shall be an abhorring unto all flesh.” (Is 66:24). In addition, Nitwits, Therefore my people are gone into captivity, because they have no knowledge: and their honourable men are famished, and their multitude dried up with thirst. Therefore HELL HATH ENLARGED HERSELF, and opened her mouth without measure: and their glory, and their multitude, and their pomp, and he that rejoiceth, shall descend into it. (Is 5:13-14)

“No Master, your Nastiness be praised!” they all replied in unison.

‘Now, Stupid Ones, is it just possible that you could tell me what you have learnt today?”

“Errrr … errr…” nervously looking at each other.

“OiOiOiOiOiOiOi! I give up you Brainless Ones. I’m sick and tired of the lot of you.

As of now, I’m kicking you out into the world. Pleeeaasssse - if you don’t remember anything else, work at getting people to misunderstand the blood – especially those blood loving Bible Believing Baptists! Pea under the cup! Switcheroo my little Fiends! We must not fail to nobble Jesus somehow! Deception is the key! It’s the spiritual! GOD IS HANDICAPPED TO WORK IN THE CHURCHES IF THEY DOWNGRADE THE BLOOD OF JESUS but they don’t have a clue what’s going on! Agree with them – it’s the shed blood of Jesus plus nothing else that saves them … BUT HIS BLOOD IS NO MORE IMPORTANT THAN ANIMAL BLOOD! Got it?!

Now, someone get me a Panadol (headache and pain reliever). I have to go and lie down – I have a really bad migraine! Class Dismissed.”

(Clang! Clang! The 3pm bell sounds for school to be let out)