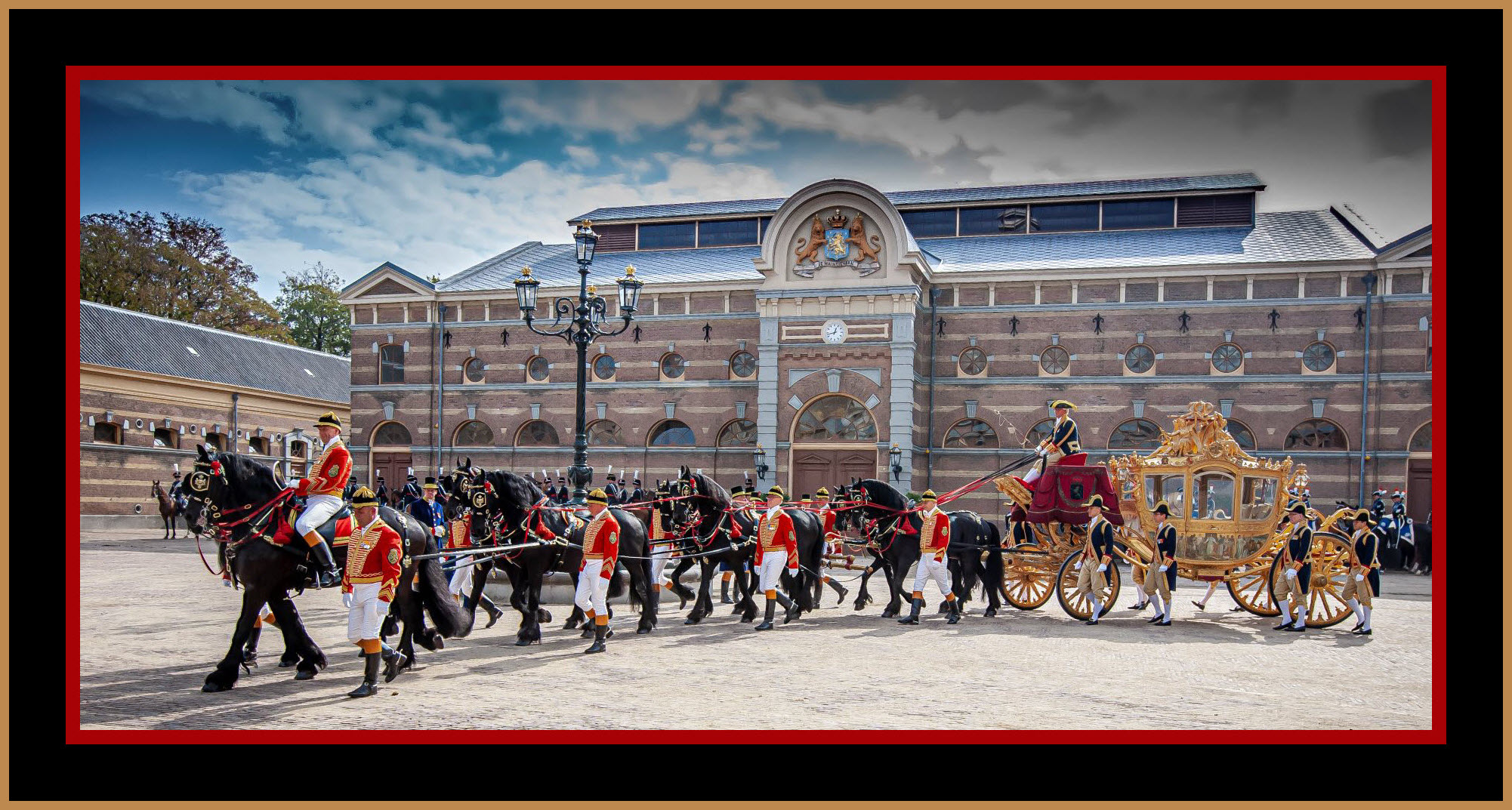 “THE HARNESS OF THE LORD”

QUESTION: “IS GETTING SAVED THE EASY BIT?”

ANSWER: Yes, in a way you could say that.

Although spiritual circumcision has taken place (Col 2:11), your saved soul is still trapped inside of a criminal … your flesh body. Old habits can die hard. And put it this way, sometimes God leaves enough fleas on the dog to let it know it is still a dog (2Cor 12:8-9). Like Paul with his thorn in the flesh (2Cor 12:7)

On a dirt road in the middle of a wide field STOOD THE KING'S CARRIAGE, edged in gold, with beautifully carved adornments. It was pulled by six large horses, two in the lead, two in the middle, and two in the rear. But the horses were not moving; they were not pulling the carriage, and I wondered why. Then I saw the driver underneath the carriage, on the ground on his back, just behind the last two horses' hooves, working on something between the front wheels of the carriage. I thought, "Man, he's in a dangerous place. If one of the horses kicks, or steps back, it could kill him. Or if they decided to go forward, or got frightened somehow, they could pull the carriage right over him."

BUT HE DIDN'T SEEM AFRAID, for he knew that the horses were disciplined and would not move until he told them to move. The horses were neither stamping their hooves, nor acting restless. There were bells on their hooves, but they were not tinkling. There were pom-poms on their heads, but the pom-poms were not moving. They were simply standing still and quiet, waiting for the voice of the King.

AS I WATCHED THE HARNESSED HORSES, I noticed two young colts coming out onto the open field next to the dirt road. They approached the carriage and seemed to say to the King's horses: "Come and play with us. We have many fine games. We will race with you. Come catch us . . .” And, with that, the colts kicked up their hooves, flicked their tails, and raced across the open field. But when they looked back and saw the harnessed horses were not following, they were puzzled. Again, the colts called to them: "Why do you stand so in the hot sun? Come over here in the shade. See how green the grass is? You must be hungry. Come and feed with us. It is so abundant, so green and so good. You look thirsty. Come drink from one of the many streams of cool water."

BUT THE HORSES DIDN'T REPLY OR RESPOND IN ANY WAY. The colts knew nothing of harnesses, and could not understand why these horses did not respond. The colts again called to the horses, but they did not answer. Neither did they stamp their feet or toss their head in response. They stood quiet and still, waiting for the voice of their King.

The scene changed. I saw two lassos fall around the necks of the two colts, and they were led off to the King's corral for training and discipline. How sad they were as the lovely green fields disappeared, and they were put into the confinement of the corral with its brown dirt and high fence. The colts ran from fence to fence, seeking freedom, but found that they were confined to this place of training. And then the Trainer began to work with them, with his whip and his bridle. How difficult, for those who had been accustomed to such "freedom" all their lives.

THE COLTS COULD NOT UNDERSTAND THE REASON for this correction and discipline. What great crime had they done to deserve this? Little did they know of the responsibility that was to be theirs when they had submitted to the discipline and finished their training, learning to perfectly obey their Trainer. All they knew was that this training was the most horrible thing they had ever known.

ONE OF THE COLTS REBELLED UNDER THE TRAINING, and said, "This is not for me. I like my freedom, my green hills, my flowing streams of fresh water. I will not take any more of this confinement, this terrible discipline." So he found a way out, jumped the fence and ran happily back to the meadows of grass. And I was astonished that the Trainer let him go, and did not go after him. He devoted his attention to the remaining colt. This colt, though he had the same opportunity to escape, decided to submit his own will, and learn the ways of the Trainer.

AND THE TRAINING GOT HARDER THAN EVER. But he was rapidly learning more and more how to obey the slightest wish of the trainer, and to respond to even the quietness of his voice. And I saw that had there been no training or testing, there would have been neither submission nor rebellion from either of the colts. For in the field, they did not have the choice to rebel or submit. But when brought to the place of testing, training, and discipline, it was then that the obedience of the one and the rebellion of the other were made manifest. And though it seemed safer not to come to the place of discipline and confinement because of the risk of being found rebellious, yet I saw that without this there could be no sharing of the abundance of the King.

FINALLY, THE PERIOD OF TRAINING WAS OVER. Was the colt now rewarded with his freedom, and sent back to the fields? No! But an even greater confinement than ever now took place, as a harness dropped about his shoulders. Now he found there was not even the freedom to run about the small corral, for in the harness he could only move where and when his Master spoke. And unless the Master spoke, he stood still.

THE SCENE CHANGED, and I saw the other colt standing on the side of a hill, nibbling at some grass. Then across the fields, down the road came the King's carriage, drawn by six horses. With amazement he saw that in the lead, on the right side, was his brother colt, now made strong and mature on the good grain in the King's stable. He saw the lovely pom-poms shaking in the wind, noticed the glittering gold bordered harness about his brother, heard the beautiful tinkling of the bells on his feet . . . and envy came into his heart. Thus he complained to himself: "Why has my brother been so honoured, and I am neglected? They have not put bells on my feet, nor pom-poms on my head.

THE KING HAS NOT GIVEN ME THE WONDERFUL RESPONSIBILITY of pulling his carriage, nor put about me the golden harness. Why have they chosen my brother instead of me?" And by the Spirit the answer came back to me as I watched. "Because one submitted to the will and discipline of the King, and one rebelled, thus has one been chosen and the other set aside."

THEN I SAW A GREAT DROUGHT SWEEP ACROSS THE LAND, and the green grass became dead, dry, brown and brittle. The little streams of water dried up, stopped flowing, and there was only a small muddy puddle here and there. I saw the little colt (I was amazed that it never seemed to grow or mature) as he ran here and there, across the fields looking for fresh streams and green pastures, finding none. Still he ran, seemingly in circles, always looking for something to feed his hunger and quench his thirst. But there was drought and famine in the land, and the rich green pastures and flowing streams of yesterday were not to be had. And one day the colt stood on the hillside on weak and wobbly legs, wondering where to go next to find food, and how to get strength to go on.

IT SEEMED LIKE THERE WAS NO USE, for good food and flowing streams were a thing of the past, and all the efforts to find more only taxed his waning strength. Suddenly, he saw the King's carriage coming down the road, pulled by six great horses. And he saw his brother, strong, with muscles rippling, sleek and beautiful from much grooming. His heart was amazed and perplexed, and he cried out: "My brother, where do you find the food to keep you strong in these days of famine and drought?

I HAVE RUN EVERYWHERE IN MY FREEDOM, SEARCHING FOR FOOD, and I find none. Where do you, in your awful confinement, find food in this time of drought and famine? Tell me please, for I must know!"

AND THEN CAME THE ANSWER in a voice filled with victory and praise: "In my Saviour’s house, there is a secret place in the confines of his stables where he feeds me by his own hand, and His granaries are never empty, and his well is never dry! IT’S CALLED THE KING JAMES BIBLE. READ AND BELIEVE!”

AND THE LORD MADE ME TO KNOW THAT TODAY when people are weak and famished in a time of physical and spiritual famine, that those who have lost their own wills, and have come into the secret place of the Almighty God (not sovereign god NKJV) into the confinement of his perfect will, shall have plenty of the bread of heaven, and a never-ending flow of fresh streams of living water – the water of his word.

“That he might sanctify and cleanse it with the washing of water by the word, … (Ephesians 5:26)