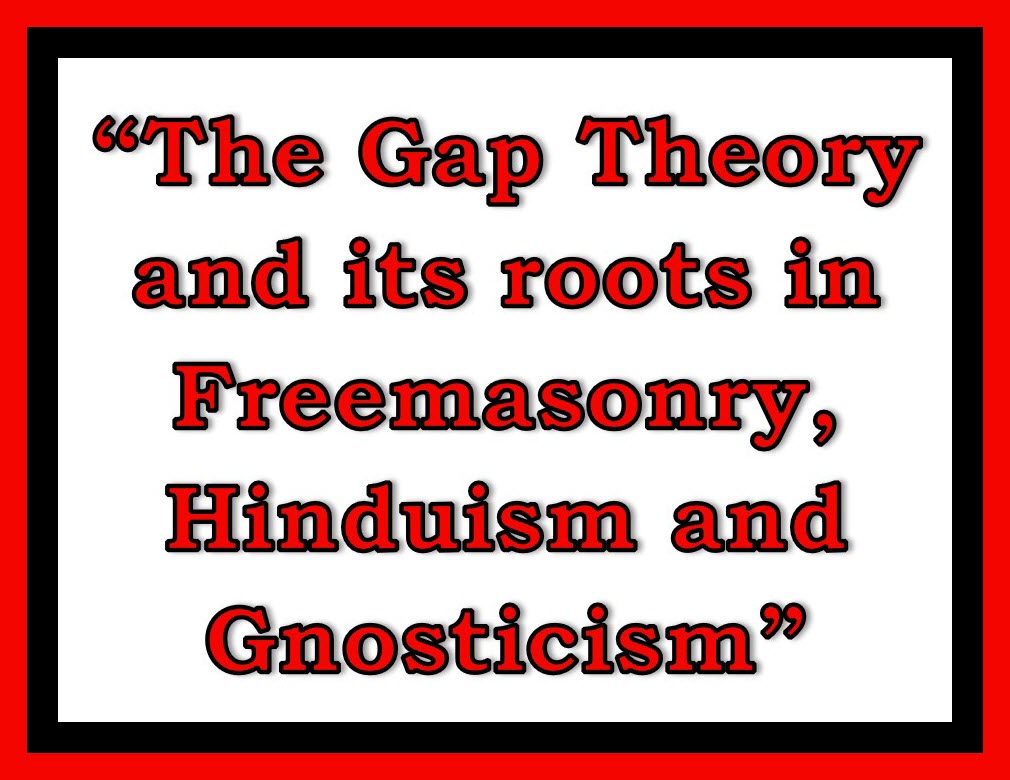 The Gap Theory and its roots in Freemasonry, Hinduism and Gnosticism

All through history, many cultures have had varying ideas about time, with the common thread of expressing time as a series of cycles. The ancient Egyptians measured time by the length of a Pharaoh’s rule, and were unfamiliar with the day, week and year time frame. As the result of their cyclical time calendar, Greek history is told within a mythological framework.

Ancient Greek mythological history was the result of their cyclical time calendar. The Hindu measurement of time intervals being based on Cosmic Cycles, rendered it virtually impossible, for historians studying written documents, to asign dates to the various events of their history. Their eternal universe, having neither beginning or end, developed from a series of time cycles each with the following pattern:

1. A start or creation 2. A development 3. An equilibrium 4. A chaotic destruction 5. Another re-creation or start.

Albert Pike, the Sovereign Grand Commander, said that “Freemasonry is identical to the ancient mysteries” of Babylon, Egypt, the Cabbala, Gnosticsm, Persia, the Zarathustrian and Buddhist religions.

Indeed, Randall Carlson, a professional Designer and Builder, a student of Sacred Geometry and a long time Freemason, sees the great masterpieces of mystical architecture as echoing the nature of Hindu Cosmic Cycles.

Now the author of the Gap Theory, Thomas Chalmers, a Freemason of the Lodge St. Vigean, and obviously ignorant of Freemasonry’s evil roots, would have been attracted to the Masons, who offered men a principled way of life.

In fact, all initiates upon joining, are urged to “Seek the Light”, which no doubt was an appealing ideal to the Christian Chalmers, who, assuming that their “Supreme Being” to be worshipped was Jesus Christ, would have been aghast, had he discovered the top level Masonic secret, that the Light was none other than Lucifer himself.

Can a man lie with dogs and not catch fleas?

While walking in the spiritual darkness of Freemasonry, and wrestling with the seemingly irrefutable tsunami of the scientific ‘truths’ of evolution of his day, it is of little wonder, that Chalmers had some Masonic revelation and enlightenment, assisted by some ‘helpful’ gnostic spirits.

“Six day creation and evolution? … Hmmm! Look Thomas, we know you’re a staunch King James man, and that’s a good thing. Now, let’s see … what can we do … that’s it! You won’t need to change a thing! How about you just drop the second verse down the page a little. Perfect!”

From that day on, Lucifer inserted himself into the first two verses of God’s creation story, with a rehash of a Hindu cosmic time cycle, that ended with the destruction of a chaotic flood.

Put simply, Gnosticism is knowing better than God. This creeping evil was seeping into the Colossian church with the following question “If all flesh and all matter are evil, how can a pure and holy God create such a world?” The Gnostic answer? He didn’t – it was done by the angels, so that God could still remain pure and holy.

Besides other topics, Paul confronts these Gnostic Christians with their ‘superior’ but false knowledge of worshipping angels with their creative acts. Against this secret and satanic wisdom, Paul emphatically and comprehensively rejects this dark knowledge by proclaiming the fullness of the Godhead bodily that dwelleth in the Lord Jesus Christ (Col 2:9).

Why would Lucifer/Satan want to promote The Gap Theory?

a. To draw attention to himself and away from Jesus Christ as the perfect creator

b. To question God’s words of a six days creation

c. To get Christians questioning their King James Bible with a “Yea hath God said?” about Gen 1:1-5 belonging to the first day

d. To establish a class of Christian Gnostics that can discover new truths and secret knowledge about the origin of the universe

e. To place the Bible into the hands of a gnostic few

f. To establish the satanic doctrine of God’s Spirit as the re-creator as he “…moved upon the face of the waters.” (Gen 1:2  b)

g. To have us believe that God did form the earth in vain contrary to Isaiah 45:18

h. To help get agreement among all other faiths to refuse what God says about creation.

i. To prove God is a deceiver in that he speaks in cryptic messages

j. To get man thinking about the cycles of life eg reincarnation being connected to cosmic time cycles

k. To make possible both evolution and six day creation

l. To have Christians accept and believe in evolution

m. To get Christian acceptance of the Gap Theory among King James Bible believers

n. To promote a weak Jesus that needs God’s Spirit to finish creation

o. Present Gods’ account of creation incomplete, as firstly, it doesn’t tell the whole truth and secondly, it leaves out important detail. If God can give us multiple pages on the details of temple construction, why not the creation?

Why is the Gap Theory needed for the end times?

With all the above mentioned points a–o, the Gap Theory finds a big welcome among ‘the faiths’, giving them common ground with which to come together. In addition, if satan can’t have Jesus scrubbed out of the creation picture, he can at least down play his achievements by 1. Having God as the Great Architect Of The Universe who is not Jesus 2. Sidestepping Jesus as creator/builder with the angels doing the heavy lifting 3. Presenting a weak and ineffectual Jesus by having satan ruin Jesus’ creation of Gen 1:1.

Why did God think it necessary for Hebrews to have a record of creation?

The Hebrew’s history is one of being surrounded by ancient pagan cultures with their ‘creation’ stories all reflecting cosmic time cycles and patterns of catastrophe. Consequently, to counter these doctrines of devils and seducing spirits, God had Moses write the true and authoritative account of creation, where (1) God, the Lord Jesus Christ, creates heaven and earth not angels or spirits (2) There is no “time gap” between Gen 1:1 and Gen 1:2 (3) Creation and “…all that in them is…” (Exodus 20:11) happens in six days (4) The literal progression of a six day creation, by not including any Cosmic Time Cycle of ruin-restoration, thereby establishes that time is linear not circular.

Is the Gap theory a recent idea?

No, being 6,000 years old, it just morphs into a different shape as appropriate. In direct opposition to God’s creation story of a literal six days, Satan has concocted an acceptable form of Hinduism, if not evolution, for Christians.

And herein lies the mystery of iniquity - that Satan, as “…an angel of light…”
(2 Corinthians 11:14) could get a devout, King James Bible believing Moderator of the Scottish Presbyterian Church, to present the modern day Christian version of Hindu Cosmic Cycles.

The Luciferian Gap Theory having been birthed in the ‘light’ of Masonic darkness, has been wrapped in the clothes of one of the first heresies of the Christian church – Gnosticism.

As God says “…there is no new thing under the sun” (Ecclesiastes 1:9).

Does the Bible refute the Gap Theory ?