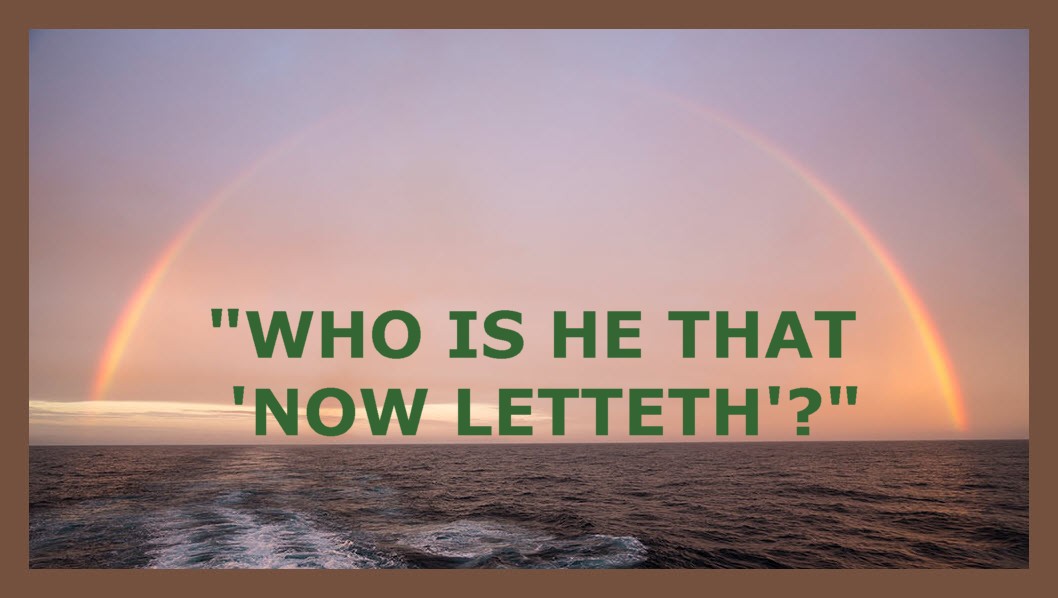 QUESTION: “WHO IS HE THAT ‘NOW LETTETH’?”

“For the mystery of iniquity doth already work: only HE WHO NOW LETTETH (prevents/hinders/stops) will let, until he be taken out of the way…” (2Thess 2:7)

BACKGROUND
Paul is writing to the Thessalonian church assuring them that they were not in the day of the Lord (the Tribulation) in spite of their intense persecution from the Romans.

He reminds them that the Christians that had already died, the dead in Christ (1Thess 4:16), would be raised first, and be caught up together (1Thess 4:17), along with those still living, to meet the Lord in the air (1Thess 4:17).

Paul says that the appearance of that Wicked, that man of sin be revealed, the son of perdition (1 Thess 2:3, 8) was being prevented or “let” (2Thess 2:7), and until this restrainer be taken out of the way (2Thess 2:7), anti-christ was stopped from using all power and signs and lying wonders (2Thess 2:9).

WHO IS HE THAT “NOW LETTETH”?
Is it …
1. The Roman Empire
2. Human government and the law
3. Satan
4. Michael the archangel
5. The church
6. The permanent indwelling Holy Ghost

We can dispense with the first two for the following reasons.

“That wicked” operates in the realm of the spiritual and therefore the “he who now letteth” must also likewise be a person and a spiritual being, in order to hold antichrist in check until the time of his revealing. It would be impossible that mere human agencies or impersonal spiritual forces would be up to the job. Furthermore, the first two will continue in a measure after the manifestation of antichrist.

We can eliminate Satan from the list of candidates for the following reasons:

Satan surely would have fulfilled his evil program on the world before the coming Tribulation.

If Satan has the power to restrain antichrist from appearing, would he allow the production of the King James Bible and the worldwide missionary program that followed it? Hardly.
As Satan’s work is evil he would not stand by and see the world evangelized by missionaries and so on.
Furthermore, Satan is not in control of the timing of the rapture and the events following.

COULD THE RESTRAINER BE MICHAEL?
We can delete him from the list of possibilities for the following reasons:

To “let” (restrain, prevent) antichrist, an equal and opposite power would be necessary.

Michael is mentioned in the Old Testament as having helped to withstand the Prince of Persia … a local power.

However, in Thessalonians, a greater level of power would be needed to “let” a superior power to the prince of Persia.

Hence we have antichrist who will operate over the whole world and not just Persia as in the prince of Persia’s case.

Hence, a greater power is needed than Michael will be required to “letteth” antichrist. Indeed, Michael in Jude 9, when contending with the devil reverted to the higher authority of the Lord, as Michael was out of his realm of authority.

Furthermore, it is to be noted that Paul in his thirteen epistles lays little emphasis on the work of angels. Why? The angels were very important to the Jews as they didn’t have the permanent indwelling Holy Ghost as protector and guide.

CAN THE RESTRAINER BE THE VISIBLE CHURCH?
The true church is used of God to hinder the full manifestation of antichrist and Satan in this present age, but he who effectively “letteth” is not the believer as such, but the Holy Ghost in the believer, which is the indwelling Holy Spirit.

THE TRUE CHURCH, THAT IS THE CHRISTIANS WHO HAVE THE PERMANENT INDWELLING HOLY GHOST, PREVENT THE APPEARANCE OF ANTICHRIST.

Human agencies, the government, the law, Satan or Michael the archangel, are not the restrainer.