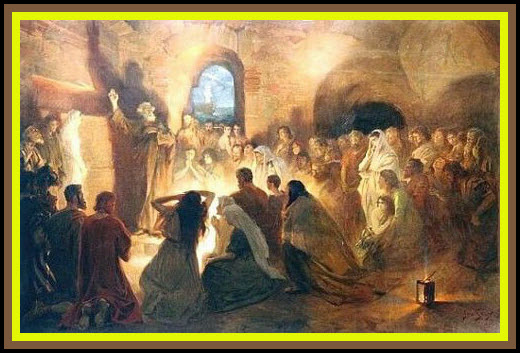 Was Peter the first pope?

Catholics believe Peter was the rock on which the church was built. Are they right? Was Peter the rock? Was he the first pope?

1. Peter was never in Rome

(a) After being the bishop of Rome for twenty five years, Roman Catholicism claims that Peter was a martyr along with Paul.

But the following dates show otherwise:

58 AD – Paul writes his epistle to the Romans, in which he greets 27 people, but doesn’t mention Peter. Surely this would a slap in the face to the supposed head of the church there?

(b) Furthermore, in none of the Paul’s church epistles written from Rome

Because Peter writes from Babylon around 65 AD (1Pet 5:13), Rome using ‘the pea under the cup’ routine, claims therefore, he wrote from Rome. Surely a deceitful claim!

How can Rome justify its position in condemning Luther because he had a wife? Why shouldn’t all priests and popes have wives if Peter had one? After all, he is the pattern after which Rome models itself.

These unfortunate scriptures for Rome are explained away as follows. They say that Peter ceased to live with his wife. Now if this was the case, did Peter’s wife walk out on him or was he a wife deserter? Were they not suited to each other? Why not? If there was a separation or divorce between Peter and his wife, surely this would not auger well for the foundation of the church? Why would Christ place Peter in such an awkward position?

Could it just be, that Peter and his wife never separated at any time? Is Paul lying by stating the following -

(Peter was referred to as Cephas).

And surely God is not saying one thing and meaning another, when he has Timothy declare “A bishop then must be blameless, the husband of one wife …” (1 Tim 3:2)?

In addition, if Rome wants their priests and popes to be holy, what could be better than to let them have a wife? After all Rome calls marriage a Holy Sacrament! Surely Rome is being inconsistent.

The fact is there is no scripture requiring celibacy for any leader of any church. Going back 3,400 years, even the Old Testament priests were allowed to marry (Ex 6:23-25). However, surrounding nations like Babylon had their pagan priests, who didn’t have wives, so that they could indulge in fornication with temple prostitutes.

Indeed we are warned that a time would come when “… some shall depart from the faith, giving heed to seducing spirits, and doctrines of devils; …Forbidding to marry…” (1Tim 4:1-3).

3. Peter refused the worship from others

There are no scriptures that say that anybody ever kissed Peter’s feet or hands and we don’t read where Peter ever washed anybody’s feet either.

Furthermore, when Paul and Barnabas, after healing the impotent man at Lystra, were mobbed by the people saying “…The gods are come down to us in the likeness of men.” (Acts 14:11), “…they rent their clothes, and ran in among the people, crying out,  And saying, Sirs, why do ye these things? We also are men of like passions with you, and preach unto you that ye should turn from these vanities unto the living God, …” (Acts 14:14-15)

Now the question is “If Peter was the first pope, would he want to be ‘out-humbled’ by his friends by receiving adulation and worship?” Of course not, but the present day pope doesn’t follow Peter’s example.

There are no scriptures indicating that Peter had a coronation with a tiara placed on his head. This is unlike the present popes that receive the blasphemous abomination of a tiara with three crowns representing ‘Father of princes and kings, Ruler of the world, Vicar of our Saviour Jesus Christ!’ Peter’s coronation day is coming along with all those in Christ, when  “…the chief Shepherd shall appear, ye shall receive a crown of glory that fadeth not away.” (1 Peter 5:4). While all popes are wearing their earthly crowns, Peter is still waiting for the real crown of glory.

5. Peter never sat on a throne

There are no scriptures to indicate that Peter ever had a throne to sit on.

6. Peter never had a treasury called “The Treasury of St. Peter”

Where do we find in the scriptures that Peter solicited and accepted money and gifts to be gathered for himself and put into a special treasury named after himself? In fact the opposite is true. Furthermore, unlike Rome that peddles artifacts, indulgences and trinkets, Peter refused to sell any gift for money saying “…Thy money perish with thee, because thou hast thought that the gift of God may be purchased with money.” (Acts 8:20).

If any doubt would still exist in the mind of the reader, Peter is on record also saying “…Silver and gold have I none ....” (Acts 3:6)

7. Peter was not infallible

How did Peter become infallible? A pope in 1870 said so. Amazing isn’t it? No-one knew this before then. Why? People were reading their Bibles that said the opposite. There are no scriptures to indicate that Peter was infallible, in fact, the opposite is true.

If Rome is reading the same scriptures as the rest of us, surely they must read the account of Peter denying the Lord, first of all when “..a damsel came unto him, saying, Thou also wast with Jesus of Galilee. But he denied before them all, saying, I know not what thou sayest." and the second time “…another maid saw him, and said unto them that were there, This fellow was also with Jesus of Nazareth. And again he denied with an oath, I do not know the man.”

Is this the infallible man of Rome upon which Christ’s church was built? Surely not.

Of course, then we are reminded of Paul’s words “But when Peter was come to Antioch, I withstood him to the face, because he was to be blamed. (Gal 2:11). Is this infallibility?

If Pope Honorious I, after his death, was denounced as a heretic by the sixth Council in the year 680, and confirmed by Pope Leo, how can Rome claim infallibility for popes?

Pope Liberious denied the deity of the Lord. Is this infallibility?

Of course the only infallible book we have is the King James Bible, but Rome thinks otherwise saying “We confess that the Pope has the power of altering Scripture, or increasing and diminishing it, according to his will.” Furthermore, Rome states “We confess that Holy Scripture is imperfect and a dead letter, until it is explained by the Supreme Pontiff.”

Continued in Was Peter the first pope?”
Pt 2 of 3.