TWO STARVING SHIPWRECKED SAILORS were washed up on an island. After trudging in the hot sun for several hours, one saw a car half-hidden in the jungle. Excitedly, he yelled “Eureka! Someone lives on the island.”

To which the other replied “Nah! Don’t be stupid, the car just evolved by itself!” 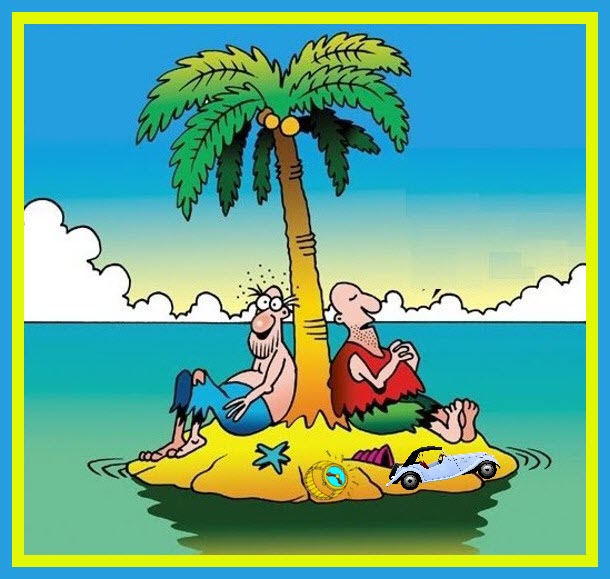 EVOLUTIONISTS ABANDON WHALES! According to evolutionary theory, only the strong should survive. “Continuing to rescue them delays the next stage of evolution” someone said.

BOMBADIER BEETLE BLOWS ITSELF UP! This beetle manufactures lethal and explosive gas in its body from time to time which must be eliminated at a crucial split second otherwise it would blow itself to pieces. The gas must pass from one chamber in the animal’s body via a valve to another chamber. The first chamber accumulates electric charge from the body’s activities, but not so the second. At the precise moment, the transfer of gas must occur before an explosion occurs.  Imagine this beetle evolving this technique over millions of years. If evolution were true, on day 1, they would all blow themselves up and never be heard of again.

A MILLION MONKEYS PRODUCE PLAY! Could a million monkeys on a million typewriters, pound out a Shakespearean play? Assume that a the monkeys typed 24 hours a day at 100 words a minute on typewriters that had 40 keys and each word was four letters. How long would it take to type the first four words? About 800 billion years!

ARCHER FISH STARVES! It spits at its prey from beneath the water with its eyes below the water but its lips protruding out of the water. The Laws of Light Refraction absolutely disprove that this technique could be developed by evolution. Imagine - they’d all die of hunger in a week!

DISMANTLE AN OLD WATCH into scores and scores of pieces and put them in a box. Now ask yourself “How long would I have to jiggle what’s in this box for it all to assemble back into a watch and in perfect working order?”

SECOND LAW OF THERMODYNAMICS disproves the theory of evolution which says everything goes from randomness to complexity. The opposite is the case.

FOSSIL RECORD EMBARRASSES SCIENCE! THERE IS NONE!

Darwin said that the fossil record would bear him out, yet more than 100 years after his death no one can find any “half fossils” Where are the alligators with wings or the ducks with three feet?

A living snail was tested and the reading showed that it has been dead for 3000 years!

MOON-WALKERS DON’T SINK INTO HUNDREDS OF FEET OF MOON DUST! Surprisingly, they found about 1/2 inch dust on the moon, showing we have a very young moon of about 6000 years old!

The Bible says that there was no death before Adam sinned. If this weren’t the case, then the earth would have been covered with dead animals to the depth of several hundreds of metres deep before Adam appeared.

THE UNIVERSE DIDN’T CREATE ITSELF. The First Law of Thermodynamics states that energy can neither be created or destroyed.

THE LAWS OF HEREDITY weren’t discovered at the time the theory of evolution was proposed in the mid 1800’s. These laws show that characteristics are passed from parents to offspring according to precise mathematical ratios unlike the random processes of evolution.

SIR FRED HOYLE (the eminent British astronomer) points out that “even if the whole universe consisted of organic soup” from which life is made, the chance of producing the basic enzymes of life by random processes without intelligent direction would be approximately 1 in 10 with 40,000 zeros after it. Such a number is beyond comprehension, but a comparison can be made. The likelihood of reaching out and by chance plucking a particular atom out of the known universe would be about 1 in 10 with 80 zeros after it. If every atom in this universe became another universe, the chance of reaching out at random and plucking a particular atom out of all these universes would be 1 in 10 with 160 zeros after it. Remember that 1 chance in 10 with 40,000 zeros after it (which is clearly impossible) only gets the basic enzymes.

But even if this happened, chance would have to go on and develop millions of kinds of cells, each with thousands of complex chemical processes in progress at the same time and in delicate balance with one another. Furthermore, these cells (there are trillions in the human body) must be gathered into nerves, eyes, heart, kidneys, stomach intestines, lungs, brain, fingernails etc and all in the right place and each functioning in proper harmony with the rest of the body. The odds that all this could happen by chance can’t even be calculated!

If the simplest cell were broken into its chemical components, the odds that they would ever get back together in the right way is one chance in ten followed by 100,000,000,000 zeros and the human body has trillions of cells.

THE EYE’S RETINA solves in a fraction of a second complex equations that would occupy a super computer for a hundred years.

THE HUMAN EYE has 100 million light sensitive cells which send information through a million fibers of optic nerve to the brain.

A STARFISH (newly discovered) has more than 1000 eyes, each with a lens ten times better than anything science has been able to make!

Evolutionists would have us believe that everything evolved by chance.

THE HUMAN BRAIN has 100 billion nerve cells linked by 240,000 miles of nerve fibers and 100 trillion connections and has a storage capacity 1,000 times that of a Cray-2 computer. The brain can operate at a thousand trillion computations per second. Evolutionists would have us believe that all this was produced by a ‘Big Bang’ happening + chance + eons of time + the survival of the fittest. There is a flaw! Until they worked, the brain (and the eye) could not aid in survival. Further, they would have us believe that this incredible intelligence system was produced without the trillions of intermediate stages happening in the right succession. Please.

Darwin called his book “The Origin of Species” (published in 1859), “my accursed book” as he thought of himself as the devil’s chaplain. In the year before its publication, he was barely able to write for more than 20 minutes at a time due to stomach pains. He finished the proof in between fits of vomiting. Ten days before the proofs were bound, he wrote to his friend Mr Hooker: “I’ve been very bad lately, one leg has swelled like elephantiasis, eyes almost closed up and covered with a rash and fiery boils. It’s like living in hell. I suppose few human beings have vomited so much during the last five months.” Symptoms of his illness included vomiting, headache, giddiness, twitching muscles, spinning head and spots before the eyes.  He lived in self doubt fearing that he’d devoted his life to a fantasy. Darwin knew that his theory would help destroy the faith of countless millions of people, in God as the creator.

WHY IS EVOLUTION SO POPULAR?

People just hate the alternative ... being accountable to the creator that made them. If the Bible account of creation is true, then man has sinned against God, and there will be a day of judgement for all men because they rejected Jesus Christ as Saviour. The Bible says God “…hath appointed a day, in the which he will judge the world in righteousness ….” Acts 17:31

“For the invisible things of him from the creation of the world are clearly seen, being understood by the things that are made, even his eternal power and Godhead; so that they are without excuse: Because that, when they knew God, they glorified him not as God, neither were thankful; BUT BECAME VAIN IN THEIR IMAGINATIONS, AND THEIR FOOLISH HEART WAS DARKENED. PROFESSING THEMSELVES TO BE WISE, THEY BECAME FOOLS.”

DEAR FRIEND, don’t be mistaken - there was no evolution, only God’s creation.

If you want to get saved, (that is, you want eternal life in heaven) pray the following prayer:

“Dear God, I’m a sinner. My goodness and doing my best can never save me and will send me to eternal hell fire. I now know Jesus Christ’s shed blood ALONE paid for all my sins and I’m trusting in his death at Calvary to save me right now. Thank you for eternal life in heaven. Amen.”

BULLSEYE!
ACCURATE BIBLE KNOWLEDGE!
“DISPROVING EVOLUTION IS AS EASY AS 1+1=2”