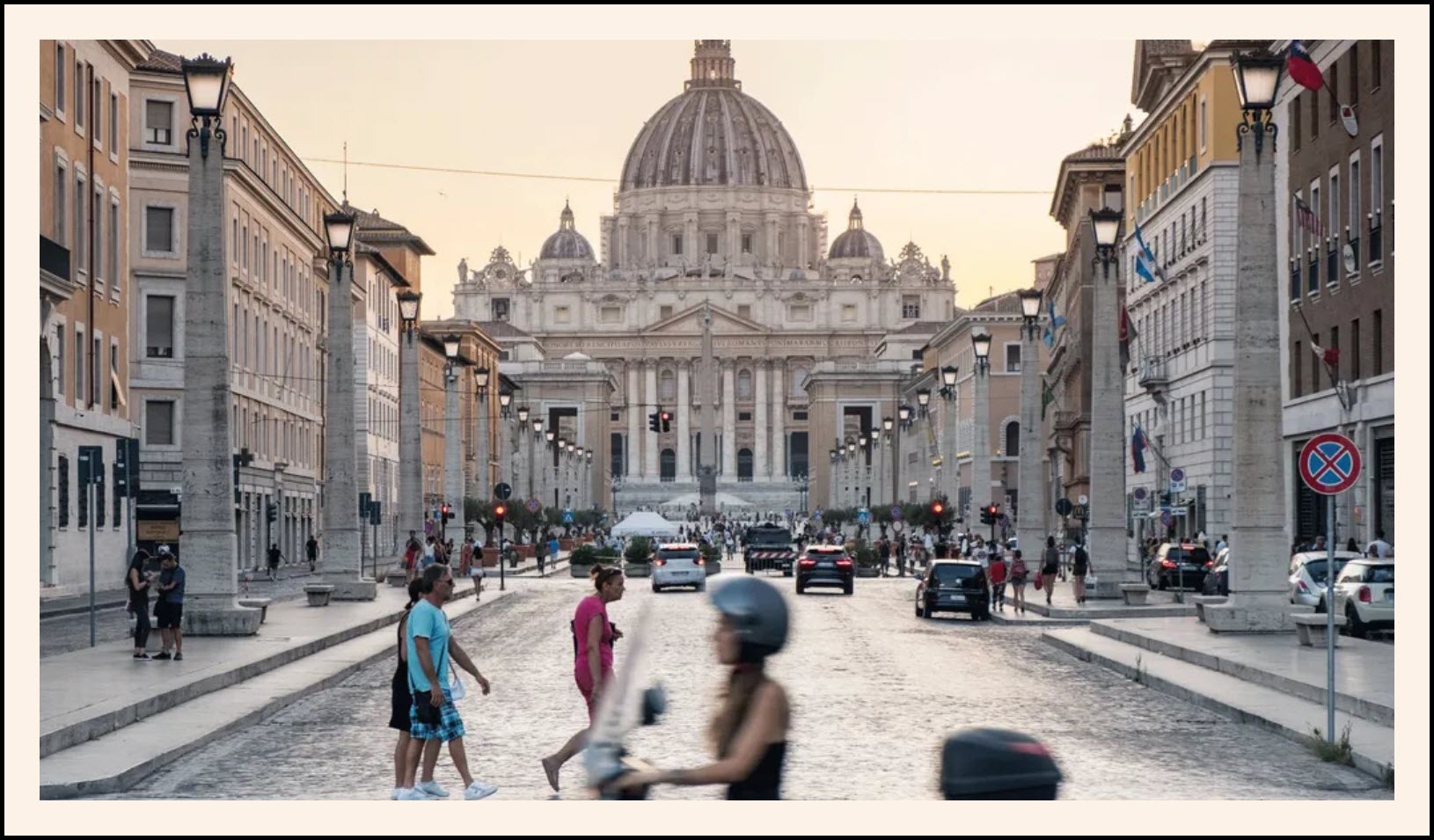 "THE ROMAN PONTIFF JUDGES ALL

MEN, but is JUDGED BY NO-ONE

We declare, assert, define and pronounce:

To be SUBJECT TO THE ROMAN PONTlFF

is to every human creature altogether NECESSARY FOR SALVATION ... that which was spoken of Christ `thou has subdued all things under his feet,' may well seem verified in ME... I have the authority of the King of kings. l AM ALL IN ALL AND ABOVE ALL, so that God himself and I, the vicar of God, have but one consistory (view), and l AM ABLE TO

DO ALL THAT GOD CAN DO.

WHAT THEREFORE CAN YOU MAKE OF

But if it wasn't so serious it'd be laughable. Unfortunately all Popes since then up to the present believe this to be the case. As a result it has been conservatively estimated that Rome has killed between 70 -

90 million people during this time for

*So corrupt was Boniface VIII (he had an insatiable lust for young boys) that Dante, who visited him, called the Vatican a "Sewer of Corruption" and assigned him to

the lowest parts of hell.

OATH OF THE JESUITS

His superior speaks to him:

"My son, heretofore, you have been taught to act the dissembler (a phony who acts like he's on your side, but really isn't) among Roman Catholics to be a Roman Catholic and to be a spy even among your own brethren; to believe no man, to trust no man; among the reformers to be a reformer; among the Hugenots (French Protestants) to be a Hugenot; among the Calvinists to be a Calvinist; among the Protestants (those that protest and disagree with the Roman Catholic Institution) generally to be a Protestant; and obtaining their confidence to seek even to preach from their pulpits, and denounce with all vehemence (violent emotion) in your nature our holy religion and the Pope; and even to DESCEND SO LOW AS TO BECOME A JEW among the Jews, that you might be enabled to gather all information for the benefit of your order as faithful soldier of the Pope.

You have been taught to insidiously (secretly) plant the seeds of jealousy and hatred between states that were at peace and incite them (stir people up) to deeds of blood, involving them in war with each other, and to create revolutions and civil wars in communities, provinces and countries that were independent and prosperous and cultivating the arts and the sciences and enjoying the blessings of peace.

To take side with the combatants (those fighting a war) and to act secretly in concert (to plot together) with your brother Jesuit who might be engaged on the other side, but openly opposed to that with which you may be connected; only that the church might be the gainer in the end in the conditions fixed in the treaties for peace and that the end justifies the means.

You have been taught your duty as a spy, to gather all statistics, facts and information in your power from every source:

To ingratiate yourself (which means to knock yourself out to become their buddies) into the confidence of the family circle of protestants and heretics (anyone not a Roman Catholic) of every class and character, as well as that of the merchant, the banker, the lawyer, among the schools and universities, in parliaments and legislatures, and in the judiciaries and councils of state, and to "be all things to all men", for the Pope's sake, whose servants we are unto death.

You have received all your instructions hereto­fore as a novice (one who has no training), a neophyte (a newly ordained priest) and have served as a coadjutor (worked as a helper), confessor and priest, you must serve time as the instrument and executioner as directed by your superiors; for none can command here who has not consecrated (made sacred or holy) his labours with the blood of the heretic (anyone not a Roman Catholic); for "without the shedding of blood no man can be saved."

Therefore, to fit yourself for your work and make your salvation sure, you will, in addition to your former oath of obedience to your order and allegiance to (be loyal and follow) the Pope, repeat after me...

I, , now, in the presence of Almighty God, the blessed virgin Mary, the Blessed Michael, the archangel, the blessed John the Baptist, the holy apostles, St Peter and St Paul, and all the saints and sacred hosts of heaven.....

I FURTHERMORE PROMISE AND DECLARE THAT I WILL, WHEN OPPORTUNITY PRE­SENTS, MAKE AND WAGE RELENTLESS WAR, SECRETLY OR OPENLY, AGAINST ALL HERETICS (anyone not a Roman Catholic), PROTESTANTS AND LIBERALS, AS I AM DIRECTED TO DO, AND THAT I WILL HANG, BURN, WASTE, BOIL, FLAY, STRANGLE, BURY ALIVE THESE INFAMOUS HERETICS (anyone not a Roman Catholic), RIP UP THE STOMACHS AND WOMBS OF THEIR WOMEN AND CRUSH THEIR INFANTS HEADS AGAINST THE WALLS, IN ORDER TO ANNIHILATE (destroy) FOREVER THEIR EXECRABLE RACE (something that is a curse; a horrible, damnable, detestable thing). THAT WHEN THE SAME CANNOT BE DONE OPENLY, I WILL SECRETLY USE THE POISONED CUP, THE STRANGULATING CORD, THE STEEL OF A PONIARD (a dagger) OR THE LEADEN BULLET, REGARDLESS OF THE HONOUR, RANK, DIGNITY, OR AUTHORITY OF THE PERSON OR PERSONS, WHATEVER MAY BE THEIR CONDITION IN LIFE, EITHER PUBLIC OR PRIVATE, AS I AT ANY TIME MAY BE DIRECTED SO TO DO BY ANY AGENT OF THE POPE OR SUPERIOR OF THE BROTHERHOOD OF THE HOLY FAITH OF THE SOCIETY OF JESUS (the Jesuits)."

This is the oath still taken today!

The Jesuits have the full backing of the

"Outside the door, Catholics are CHAMELEONS; a foot in the door - they're LAMBS; inside, TIGERS - they'll rip you to shreds - literally!"

- not known in the early church and absent from the King James Bible (KJB).

3. Confession of sins to priests - not in KJB

7. Confirmation - not in KJB

13. Other mediators between God and man - not in KJB.

20. Catholic tradition more important than what the Bible says (1229AD) - not in KJB.

25. Low moral standards - rampant homosexuality and child molestation among priests - not in KJB.

26. Devotion to the scared heart of Jesus and Mary - not In KJB.

28. Peter not the first Pope (definitely not infallible).

30. Responsible for the Inquisition, torture, massacres, murders and wars from 1184 AD - have killed 70-90 million.

31. Roman Catholic church is Mystery Babylon the Great and the Whore of Babylon in Revelation 17.

32. Roman Catholic church didn't give us the Bible - God did.

34. The Immaculate Conception of Mary (has no sin) - not in KJB.

35. The Assumption of Mary (Mary didn't die but taken to heaven) - not in KJB.

The list is endless of all types of sins and crimes committed by the Roman Catholic Popes.

The Catholic church has been built on a sewer of rape, mass murder, sodomy, homosexuality, child molestation, torture, incest, violence, robbery - to name just a few.

Rome has in place today the killing, torture, murder, rape, strangling etc of anyone not a Roman Catholic - particularly Jews and Fundamental Christians ('faith alone').

ROMAN CATHOLICISM IS NOT A RELIGION - IT IS A POLITICAL POWER USING RELIGION AS A FRONT FOR WORLD SUBJUGATION.