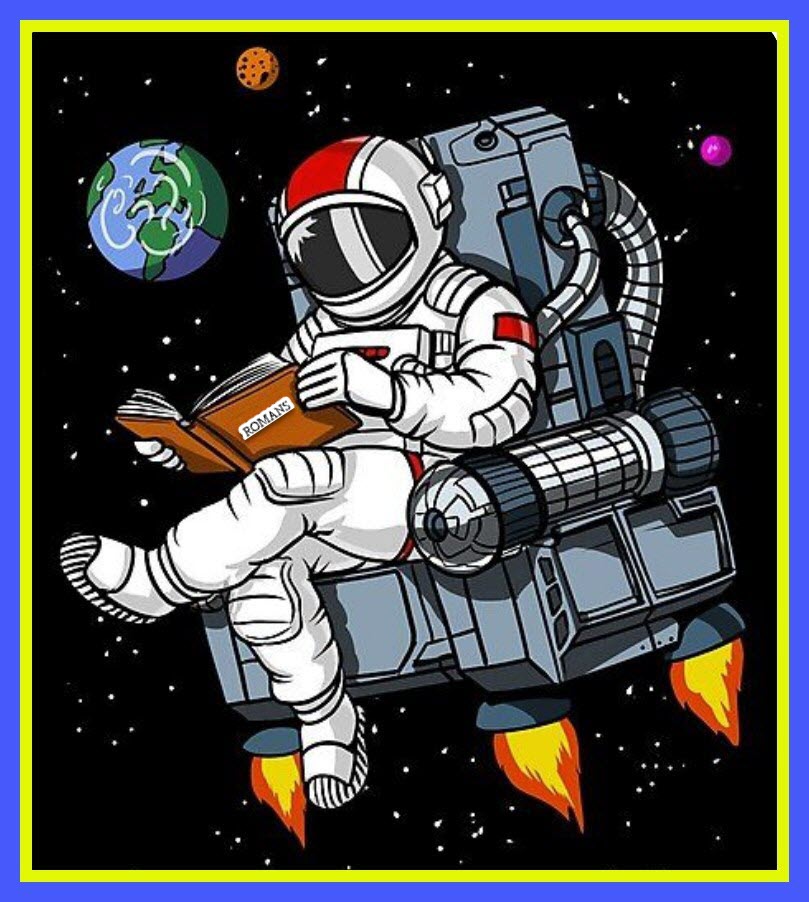 QUESTION: “CAN I STUDY THE BOOK OF ROMANS IN A VACUUM BY ITSELF?”

The Apostle Paul’s Book to the Romans puts to death any historically true doctrines from previous dispensations found in the books of the four gospels of Matthew, Mark, Luke and John, and the books of Acts and Hebrews, with Matthew and the last two, being three of the most difficult books in the New Testament to understand, not to mention the whole Bible.

Most Christians don’t dare study Romans as they think it is a difficult book to understand. This is because they hold near and dear to their hearts, superseded doctrine out of the books of Matthew, Acts and Hebrews.

The opposite is true. The Book of Romans is easy to understand but hard to accept because of ‘water issues’. People have a water problem.

Like the Book of The Revelation, it is easy to understand but hard to believe.

It becomes a watershed where decisions must be made about doctrine, that were once held in true ignorance, but now start to become willing ignorance.

To understand the full import of the Apostle Paul’s Book to the Romans, other doctrines from other dispensations must die.

As stated, one cannot study Romans in and of itself without it affecting the rest of the scriptures, and in particular the New Testament.

You see he had found that water baptism was interfering with the gospel.

People were experiencing the going under the water as being more exciting and dramatic than simply believing.

Jacob to Arvi “Arvi, re you a Christian now?”
Arvi to Jacob “Oh yes Jacob! I got water baptised!”

Dear Reader, you ask a Baptist if they are saved and they will answer “Oh yes, I’ve been water baptised.”

This is why Paul’s gospel, the only one for today, is as they say “Bone dry, parched as a dead twig in the desert under the hot sun for twenty years and crispy as a packet of potato chips.

Furthermore, there is not one drop of water in the Apostle Paul’s 14 books of the New Testament.

It’s no wonder that 99% of Pastors keep preaching from the ‘wet’ books of Matthew, Mark, Luke, John and Acts.

When first saved, they have been taught irrelevant and superseded water doctrines upon which they have made their subsequent living.

Similar to a chicken that first hatches – it follows the first thing that moves and adopts that thing as its mother.

Chickens have followed elephants as their mother.

Look, I understand a Pastor holding the truth in unrighteousness if he has a family to feed. I mean few Pastors will walk away from his comfy church living declaring “I have now had my eyes opened. I will now go and earn an honest living as a labourer!”

I haven’t met one yet. But the people love to have it so too. It’s like a mutual death roll – people will not endure sound doctrine and the Pastor keeps turning the handle with what they want to hear. Everyone’s happy.

The modern day Pastor’s mantra is “I will study to show myself approved unto the people” and the people said “Amen!”

It’s like Pilate washing his hands of the whole matter and submitting to the will of the people saying “Your will be done.”

I used to think that Pastors were in control, until I realised that the people that hire and fire the Pastor will be there long after their present Pastor has disappeared from their church building. It is the people who will not endure sound doctrine. The people have itching ears.

The true definition of “itching” is to be found in the scriptures where The LORD will smite thee with the botch of Egypt, and with the emerods, and with the scab, and WITH THE ITCH, WHEREOF THOU CANST NOT BE HEALED. (Deut 28:27)

Dreadful, isn’t it? Terminal! Can’t be healed! You don’t slide up a slippery slide! You don’t parachute up into a plane! It’s bungee jumping without the cord attached to the feet!

So folks this is the Christian church we have today. If you look at any church today, willing doctrinal ignorance will jump out at you like a sore thumb.

It’s the agreement of lies that operates both ways between the Pastor and the congregation. It’s the wink-wink, nudge-nudge “Let’s keep it between ourselves!”