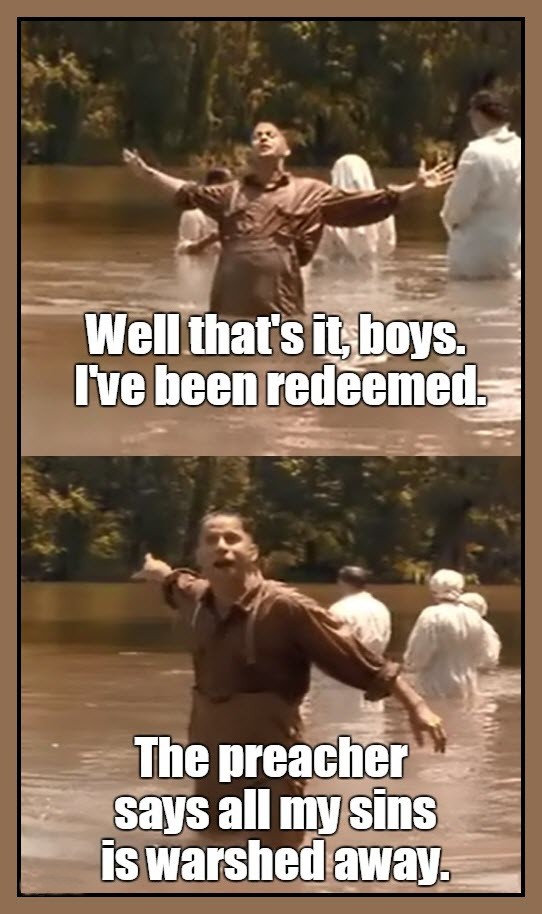 QUESTION: “IF PAUL STOPPED WATER BAPTIZING WHY DO CHURCHES CONTINUE TO DO IT?”

ANSWER: IT MUST BE TO DELIBERATELY CONFUSE PEOPLE!

“For Christ sent me NOT TO BAPTIZE, but to preach the gospel: not with wisdom of words, LEST THE CROSS OF CHRIST SHOULD BE MADE OF NONE EFFECT.” (1Co 1:17)

EXPLANATION
Isn’t it strange that that the two pillars upon which many churches base themselves, are actually pillows?

Why would Paul endorse water baptism and the Lord’s supper as ordinances, as orders, as “must do’s”? HE DOESN’T.

One can only shake one’s head as to why churches bring to nought the word of God through their tradition (Matthew 15:6)

Let’s be crystal clear and summarize at the beginning:

1.   Water should be banned within a mile of any Baptist church – or any church for that matter.

2.   The Lord’s supper is a remembrance not an ordinance!

They are orders for the church.

Wherefore if ye be dead with Christ from the rudiments of the world, why, as though living in the world, are ye subject to ordinances, (Touch not; taste not; handle not; Which all are to perish with the using;) after the commandments and doctrines of men? Which things have indeed a shew of wisdom in will worship, and humility, and neglecting of the body; not in any honour to the satisfying of the flesh. Colossians 2:20-23

We are all familiar with city ordinances as being orders for city living.

“Do not park on the footpath!”
“Do not throw rubbish out the window!”

As Paul said For Christ sent me NOT TO BAPTIZE, but to preach the gospel: not with wisdom of words, lest the cross of Christ should be made of none effect. 1 Corinthians 1:17, and we are to follow Paul (1Cor 11:1), then why would he stress the need for churches to do something that he wouldn’t do?

Surely he wouldn’t. Paul is not saying “Do as I say and not as I do”. Paul was not a hypocrite.

Secondly Paul states Now I praise you, brethren, that ye remember me in all things, and keep the ordinances, as I DELIVERED them to you. 1 Corinthians 11:2.

This is past tense. Paul has already given the church these ordinances in the previous ten chapters and there are many ordinances.

Is it possible that the church has given people the stamp of approval of being saved via the rituals of the Lord’s supper and water baptism? Sadly, we must say “Yes” to this question.

WHY HAS THE CHURCH GIVEN ITS STAMP OF APPROVAL?
There is a set belief among many Christians that water baptism and the Lord’s supper are the only two ordinances for the church today. Is this correct? No.

We must remember that Paul is writing to a disorderly church, a church out of order. They were in great disorder.

The following outlines just a few of the sins of the Corinthian church:

It had a man having relations with his father’s wife; there were quarrels and divisions; there was the fleshy misapplication of tongues; there was division and vain glory; they were keeping company with professing Christians who were fornicators, covetous, idolators, railers, drunkards and extortioners; they were unfaithful stewards; they were taking each other into the world’s courts; they were defiling the consciences of the weak in faith; they were not keeping their bodies under control; they were lusting, fornicating, murmuring, idolatrous and tempting Christ.   HAS TODAY’S CHURCH WRONGLY MISINTERPRETED THE MEANING OF WHAT IS AN ORDINANCE?
The proper meaning of the word ‘ordinance’ is to bring back order, to correct wrong behaviour, and in this case, to correct the wild excesses of the fleshy Corinthian church.

Here, Paul was in fact referring to instructions previously given. This is what Paul’s ordinances are – they are orders with reason. Paul is certainly not averse to giving orders as he directly orders them concerning ‘the collection for the saints’ (1Cor 16:1).

They are instructions on how to bring back and set in order, the proper behaviours in the church.

Now, are we to suppose that the symbolic ceremonies of water baptism and the Lord’s supper would do this? Hardly! What Paul required was a change of the heart and behaviour, a repentance, not outward ceremonies.

Indeed, some of the Thessalonian church were walking disorderly by not working and being busybodies, and Paul wanted a change of their behaviour. Did he recommend more water baptism and Lord’s supper to accomplish this. Of course not!

What were the earlier ordinances and instructions that had already been delivered to them in the first ten chapters? There were many! The Corinthian church needed them all as they were a church full of the flesh.

‘Ordinances’ are the procedures and instructions necessary to correct and keep right order in an institution. You will note that Paul doesn’t use the word ‘ordinances’ for any other church.

Paul is saying that keeping the symbolic and formal ceremonies of the Lord’s supper and water baptism has nothing to do with correcting the out-of-control behaviour at Corinth.

No, Paul is needing something more concrete than rituals and ceremonies. Paul wanted true repentance and changes in their sinful behaviour.

The Church at Corinth was unworthily (1 Cor 11:27) keeping up appearances with many Lord’s suppers and water baptisms (1Cor 1:17) as an outward show, but what the Lord wanted was a changed heart.

Indeed the Lord reminds us of a similar situation through the prophet Isaiah to Judah (Is 1:10-15), where he calls them Sodom. Stop the ceremonies! I want true repentance - a change of heart!