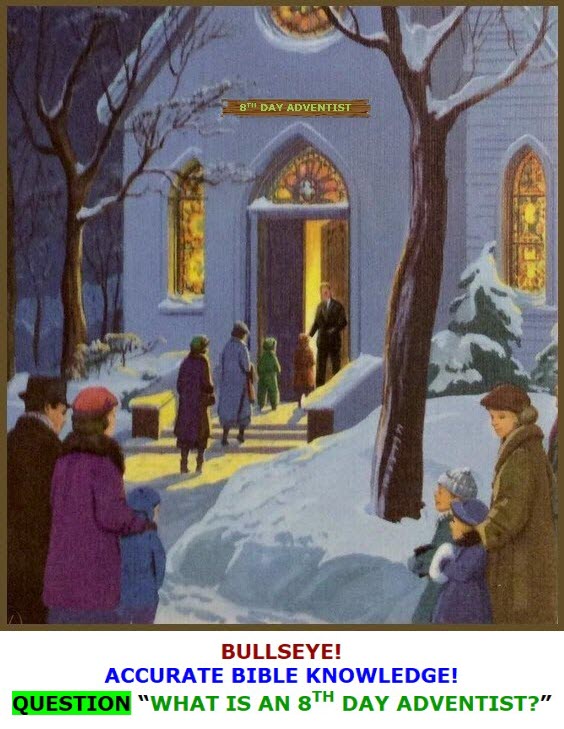 QUESTION: “WHAT IS AN 8TH DAY ADVENTIST?”

ANSWER: “A BAPTIST WHO FOLLOWS JESUS”

ARE THESE BAPTISTS SAVED?
I don’t know.

ARE THESE BAPTISTS CHRISTIANS?
I don’t know.

WHY DO YOU CALL THEM 8TH DAY ADVENTISTS?
They follow Jesus and worship on Sunday.

WHAT IS A 7TH DAY ADVENTIST?
They follow Jesus and worship on Saturday

IS THAT THE ONLY DIFFERENCE?
No – although Baptists profess to be born into the kingdom of God.

DO BAPTISTS KNOW WHAT THE KINGDOM OF GOD IS?
No and there’s the problem right there … a lack of knowledge.

WHAT’S THE DIFFERENCE?
The kingdom of God is RECEIVED not manifested physically here on earth (Rom 14:17).

The kingdom of heaven was to be a physical kingdom here on earth with Christ when he deliberately gave Israel an impossible set of earthly rules to keep (Matt 5-7).

SO ARE YOU SAYING BAPTISTS ARE NOT BORN AGAIN?
Not necessarily. Put it this way, ask them into what kingdom are they born.

WHY?
If they say “The kingdom of God”, what are they doing mucking about with the kingdom of heaven rules of the Sermon on the Mount?

I DON’T UNDERSTAND?
Ask them why they are following Christ.

Where does it say in the Bible that Christians are to follow Christ?

Furthermore, he said the only way to have past sins forgiven was to kill animals for a blood sacrifice.

In addition, he never ate prawns! CHRIST WAS NOT A CHRISTIAN!

As professing Christians, why are Baptists trying to keep the Sermon on the Mount rules that were meant for Israel?

BUT SURELY THERE’S VALUE IN TRYING TO LIVE RIGHT?
God doesn’t have a problem with that… but not with the impossible rules given to Israel! They were designed so they couldn’t be kept!

For example, are your sins forgiven as a Christian even though you won’t forgive others?

BUT SURELY WHAT YOU ARE SAYING IS BLASPHEMY!
You’re only getting upset because your tradition is getting in the way.

BUT SURELY BAPTISTS ARE WALKING IN THE SPIRIT?
How can they be? The Spirit agrees with the word

And take the helmet of salvation, and the sword of the Spirit, which is the word of God: Ephesians 6:17

Furthermore, the word is not open to private interpretation (2Pet 1:21).

WELL BAPTISTS HAVE THE WORD OF GOD!
No they don’t. The word of God is The King James Bible.

WELL SOME OF THEM HAVE THE KING JAMES BIBLE!
Yes, but they don’t believe it.

They may as well have a Phantom Comic under their arms.

OF COURSE THEY BELIEVE IT!
No they don’t. You start mixing in the Greek and saying things like “A deeper understanding with the Greek is ….”

My dear friend, the use of the Greek in a church is ALWAYS used to undermine the English, give another interpretation, substitute words, take verses out of context, add words and so on.

SO YOU’RE SAYING BAPTISTS DON’T WALK IN THE SPIRIT?
No, I don’t say that … but God does!

WOW! THAT’S A BIG CALL!
Do you think? The bottom line is this … some 8th Day Adventists, that is Baptists, may very well be born into the kingdom of God, and have eternal security, but they are still following Jesus and his doctrine with his kingdom of heaven rules here on earth.

You can’t follow two people at once – you can’t follow Paul and follow Christ at the same time. The scriptures say Christians are to follow the Apostle Paul and his kingdom of God doctrine.

BUT SURELY WE FOLLOW CHRIST?
We do, but not directly! Paul shows us how to as Christians – not as Jews!

Put it this way, as a Christian we are in Christ, and will be conformed to his image (Rom 8:29), but we don’t follow him as a Jew!

Paul does not say “Follow Christ!”, as to try and live two different doctrines at the same time is to be DOUBLE MINDED. You can’t have mixtures (1Cor 11:30).

You can’t drive a Rolls Royce with a mixture of water and petrol in the tank.

You can’t live the Christian life with a mixture of Christ’s Sermon on the Mount doctrine and the apostle Paul’s kingdom of God doctrine (1Cor 11:1).

The best way to describe the effects of pride is as follows.

Sodomites (‘homosexuals’) are proud to be known as proud. They have Pride Marches in public spaces. They wear their sin with pride.

Can we use this pride analogy and also say Eighth Day Adventists spiritually grope in the dark also not knowing how to find the door (John 10:9)?

Pride blinds the minds of the proud so they can’t see.

Have you ever wondered why God would say in the scriptures

For the time will come when they WILL NOT endure sound doctrine; but after their own lusts (and there are three 1John 2:16) shall they heap to themselves teachers, having itching ears; 2 Timothy 4:3

“What is the reason for this Lord” I have asked for many months.

People of pride have stiff-necked wills, impenetrable wills and impervious to reason. It’s not as though they can’t believe … they won’t believe under any circumstances!