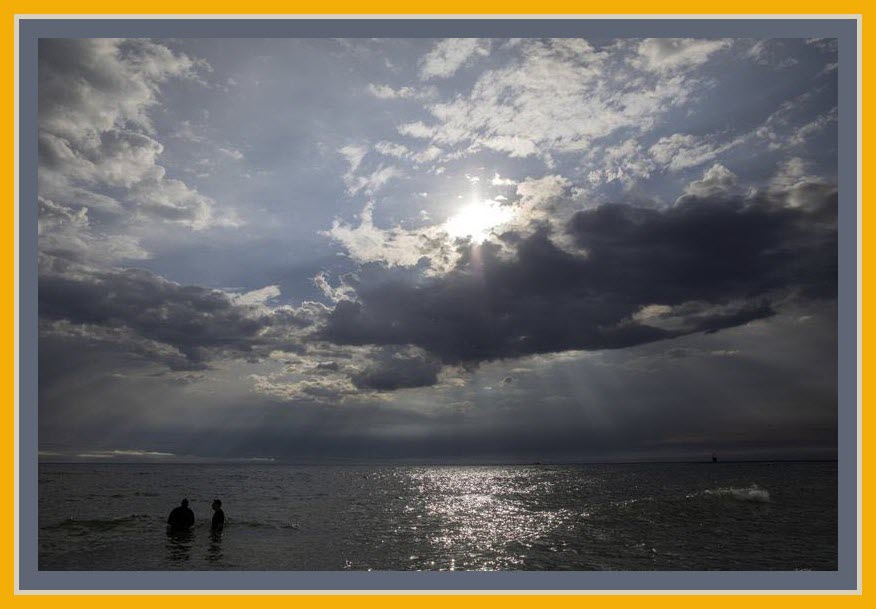 QUESTION: “WATER BAPTISM SHOWS YOU ARE A BAPTIST BUT NOT NECESSARILY A CHRISTIAN, CORRECT?

EXPLANATION:
In the Bible there are nine baptisms each representing different functions.

The word ‘baptism’ can refer to any of four types - water, Holy Spirit, Holy Ghost and fire baptism.

Paul draws the similarity of the church of Israel in the desert and the Christian church under Paul’s gospel.

Israel was under the divine covenant of being under the cloud that led them in the night and miraculously protected from the pursuing Egyptians.

The Christian church also has the divine testament of the pillar and cloud, being Jesus Christ our Saviour, while also being protected from Satan.

Just as Israel was physically baptised unto Moses through the sea, with all the laws, privileges, coverings and protection, the church also has been spiritually baptised in to Christ the Saviour.

Both Israel and the church have great similarities in the eating and drinking.

Paul draws the parallel that both parties, Israel and the Christian church … did all eat the same spiritual meat; And did all drink the same spiritual drink: for they drank of that spiritual Rock that followed them: and that Rock was Christ. 1Co 10:3-4.

The manna on which Israel fed was a type of Christ come down from heaven, upon which they could feed and live. Their drink was a stream that came from the Rock which was Christ.
Christians, spiritually speaking, are in the Rock and we eat and drink from his words.

John called Israel to repent of their PAST sins of their cold indifferences to God, their going through the motions of blood sacrifices, if indeed they were still sacrificing, then get water baptized as an outward show of being cleansed from these sins. This turned them back to God. He was also preparing them for their coming Messiah.

Of course this has nothing to do with Christ being a sinner. This was a changing of the guard from the old priesthood of Aaron to the new priesthood of Christ the Messiah. Aaron had the water and the oil (Ex 30:19, Exo 30:29-30) while Christ had the water and the dove. This baptism is not our example to follow saying “Well, if Christ was baptised, then we must do likewise.”

This was a baptism not with fire but AS OF fire (Acts 2:3), but nevertheless, indicating the wrath of God, that Israel was now under God’s judgment in that he was temporarily putting Israel aside with their exclusive access to God in the Hebrew language, and that God was now speaking to all nations in their own tongue. Salvation was open to all, Gentile and Jew alike, and not just the Jew.

The mother of James and John Zebedee is having pointed out to her, that in her wanting particular favours for her sons sitting next to Christ in heaven, there will be a price to pay. Christ tells her of the extreme suffering that he would undergo … and that they would too.

Just prior to this, Christ has given the disciples a very severe upbraiding for their unbelief that he was alive (Mk 16:11, 13, 14). Now for the remedy for this past sin he says to them that “If you believ-ETH that I am resurrected, that is continuously believe all the time from now on, without let up, no gaps, but with constant belief, and then you get water baptised, you shall be saved and not be damned.

Of course, many of the disciples other than the chosen twelve, walked away by not continuously believing in Christ, and were damned. Of course should they repent and change their minds about this, they would go to Abraham’s Bosom when they died. If not, they would go to hell upon death.

As the Baptist Church hold this very near and dear to their hearts as the Great Commission, they suddenly disappear and can’t be found when they read that if they are under the Great Commission, they all will be confirming their ministry with the signs following them of casting out devils, speaking with new tongues, taking serpents, drinking deadly liquids, and last but not least, laying hands on the sick for their recovery. OUCH!!! Surely this is not the gospel of Paul whereby we have eternal security upon believing once.

Answer? The great Commission was for the disciples for that time only and has now been replaced by Paul.

Peter was saying “Israel, turn your hearts back to God the Son.”
They were baptised in the name of the Lord Jesus Christ.
(Indeed, Israel at the Red Sea, had their hearts turned to Moses.
They were baptised unto Moses, that is, in the name of Moses.)
As John was turning the hearts of Israel to God for the confession of their past sins to God, similarly, Peter is turning their hearts to Christ, and to confess their past sins toward him – that is their rejection of Christ and their putting him on the cross. They were pricked to the heart.

Now if the men of Israel would do this they would receive the Holy Ghost, and if they continued to follow Peter’s instructions, then to follow Paul’s gospel of believe with no water, they would go to heaven upon death.

Dear Reader, can you see how God has slowly refined his gospel message from John to Paul?

Could you preach that today? Of course not. “Repent of your sins towards Jesus Christ, come and get water baptised and you will get the Holy Ghost.” Water baptism, a work, to get saved? Ridiculous! It’s not of works, for by grace are ye saved not of works … (Eph 2:8-9). This would simply send people to hell.

However, today, to get saved, you don’t need to know much about Bible doctrine. People will have Peter’s gospel preached to them, and being fully persuaded that Christ can save them, they will be saved.

However, once saved, if they still believe Acts 2:38 is the gospel for today, then their salvation will not be in jeopardy but their rewards will be in jeopardy in heaven. Furthermore, many will get weak and sickly and fall asleep (1Cor 11:30).

When Peter speaks to the men of Israel, and they are pricked to the heart, they know they must DO something. Peter’s gospel to Israel reminded them of John’s repentance needed and confession of past sins, with a water baptism signifying a symbolic washing away of sins and starting again.

That is why the men of Israel said “What shall we DO?” This was the jailer’s question as well.

He was expecting to have to repent, get water baptised. But no! God’s instructions had changed to a simple “Believe on the Lord Jesus Christ”.

Peter’s gospel for the remission of past sins with water baptism is poles apart, chalk and cheese, when compared to Paul’s gospel.

This is the baptism that happens when a person believes on the Lord Jesus Christ, without water baptism, and is placed into the death of Christ with eternal security.

This is Paul’s gospel, a dispensation of the gospel given him (1Cor 9:17) that negates all others. This is the final, clean, pure, waterless gospel of the grace of God, for a person to enter heaven. We must not add water!

This last one is the baptism of fire for those who have died and gone to hell (the rich man in Luke 16:19-31) and have now had their everlasting accommodation into pure literal fire.

IN SUMMARY:
The three cases in which Baptist churches are spiritually blinded are as follows.

JOHN TO ISRAEL FOR REMISSION OF SINS (Matt 3:6)
With John, this is Israel’s confession of the past sins, with water baptism, of having turned their hearts away from God the Father.

PETER'S BAPTISM TO ISRAEL FOR REMISSION OF SINS (Acts 2:38)
With Peter to the men of Israel, this is their confession of the past sin, with water baptism, of crucifying Christ.

Now the question is “Why” Oh why? Oh why? Oh why, do Baptist Churches insist on water baptism? Why add this impediment to Paul’s waterless gospel?

In asking Baptists if they are Christians and saved, their reply is inevitably “Oh yes, I’ve been water baptised.” Can you see what Baptists are trusting in the go to heaven.

The reason they give is that other Christians may know they are Christians. But this is no where to be found in scripture!

Surely water baptism is not a fruit of the Spirit? The scriptures say Ye shall know them by their fruits not their water baptism.

Could someone please write in and tell me the scripture that water baptism lets others know we are Christians.
Why not just get people to just sign a document?

In their insistence of water baptism, Baptists create a mixture in their churches and God hates mixtures. End result? A spiritual double mindedness which God rewards accordingly.

Why ADD A STUMBLING BLOCK for people? I scratch my head!

Why not add physical circumcision as well? It makes just as much sense! As stupid as it sounds, it just might go some way to show other Christians we really are a Christians too! And make it mandatory as well!

Why not have people rub their heads and tummys at the same time and then have a secret handshake? It makes as much sense doesn’t it?

Why not make a pilgrimage to Jerusalem as the requirement to show your Christianity?

How about when you walk into the church you should bow, not step on the door-line, cross yourself and say ‘Three hail Marys”.

We see, how The Baptist church has struggled to get free of John’s baptism of where Israel had to confess their past sins and get water baptised to get right with God.

And right here, we have the reason why Baptist tracts have the blasphemous salvation message of “Repent and turn from your sins that God may forgive you.”

Furthermore, in asking Baptists if they are Christians and saved, their reply is inevitably “Oh yes, I’ve been water baptised.”

Can you see what Baptists are trusting in the go to heaven.
Truly they bring to nought the word of God by their tradition.

YES! WATER BAPTISM SHOWS YOU ARE A BAPTIST …
BUT NOT NECESSARILY A CHRISTIAN!

SURELY CHRIST’S INJUNCTION NOT TO OFFEND LITTLE CHILDREN SHOULD ALSO APPLY TO TEENAGERS AND ADULTS IN THE CHURCH?

DEAR BAPTIST, KNOWING THE TERROR OF THE LORD AT THE JUDGMENT SEAT, HOW WILL YOU PLEAD?

DO YOU THINK YOU KNOW BETTER THAN PAUL?
YOU’LL ADD WATER WILL YOU?

“For Christ sent me not to baptize, but to preach the gospel: not with wisdom of words, lest the cross of Christ should be made of none effect.” (1Co 1:17)

SURELY THIS MUST RANK AS ONE OF SATAN’S
MASTER DECEPTIONS - TO GET WATER INTO CHURCHES.