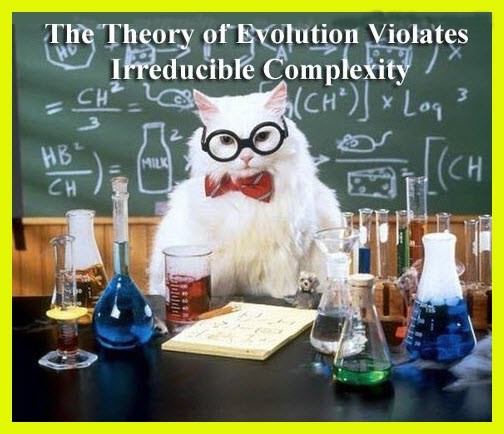 WELL, PARDON MY IGNORANCE, WHAT DOES THAT MEAN?

It means that you have to have all the parts of an outboard motor for it to start up and run.

It means you just can’t have the fuel tank and nothing else, or just half a fuel tank.

It means you just can’t have half battery and nothing else.

It means you MUST have the several hundred parts of the motor before it will start.

For a mouse trap to work, there must be All nine parts present eg spring, wood base and so on.

CONCLUSION? Evolution is a fairy tale for people who hate God!

Just suppose we all came from primordial slime rich in proteins and nutrients (how did they come into existence? Everything must have come from rocks and then sand, and water, and then it was struck by lightning and so on).

So over the course of say 10 billion years, or so, as this man and woman develop, we are then reduced down to a window of opportunity of a few years, for them to have sex. I mean what are the odds of that? Addicted and hardened gamblers will not bet on a tossed 20 cent piece landing on its side five times in a row! So this perfectly evolved man somehow must find this perfectly evolved woman in a space of a few years! If not the human race can’t reproduce and will die out. That means another 10 billion years or so must go by before we can have this chance again!

CONCLUSION? Evolution is a fairy tale for those who deny the existence of the Creator!