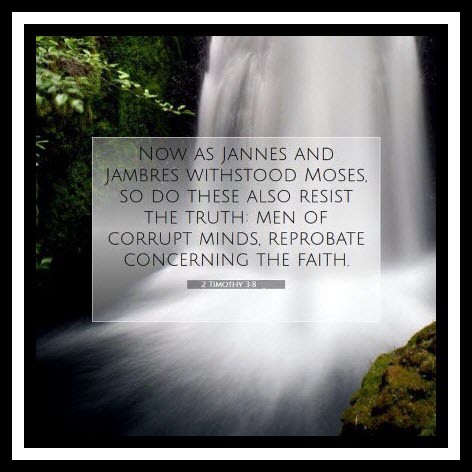 BULLSEYE!
ACCURATE BIBLE KNOWLEDGE!
“WHO WERE JANNES AND JAMBRES?”

ANSWER: No. They were two Jews known to Moses. They were not Egyptian magicians.

EXPLANATION:
The Bible says “v1 This know also, that in the last days perilous times shall come.
v8 Now as JANNES AND JAMBRES withstood Moses, so do these also resist the truth: men of corrupt minds, reprobate concerning the faith.
v9 But they shall proceed no further: for their folly shall be manifest unto all men, as theirs also was. v10 But thou hast fully known my doctrine, manner of life, purpose, faith, longsuffering, charity, patience (2Tim 3:1, 8-10)

THE CONTEXT IS THIS:
1. It’s Paul’s 2nd time in prison ready for his beheading around 68AD
2. Last days warning for Timothy and the church to lookout for people in the church like Jannes and Jambres that stood against Moses. These were NOT magicians in the courts of Pharaoh.
3. These were men reprobate concerning the faith, resisting the truth and not having the doctrine of Paul.

QUESTIONS:
1. Q: Why would Paul use the examples of pagan Egyptian magicians to describe people coming into the church? A: He wouldn’t and didn’t.
2. Was Paul’s big warning to Timothy “Watch out for the types like ‘Madame Blavatsky’ and ‘Alister Crowley’!” with Blavatsky and Crowley pretending to be Christians, lovers of God and the truth? Of course not!
3. Was Paul saying “O Timothy, watch out for that evil Black Sabbath music or heavy metal bands?” No, he was saying watch out for men who look like the real deal, sound like the real deal, but aren’t the real deal. These two men, Jannes and Jambres, were examples of a Fifth Column, white-anting the church from within the ranks.
Paul uses the example of Jannes and Jambres being two men who were ‘closer to home’ than the obvious evil baddies of the world or the magicians in Pharoah’s court.

THE USE OF THE WORD “WITHSTOOD”
The word “WITHSTOOD” means to greatly oppose with firm determination
1. Paul withstood Peter (Gal 2:11)
2. Alexander posed as man of the faith and greatly withstood Paul’s words and opposed him and vice versa (2Tim 4:14-15)
3. Azariah the priest withstood Uzziah the king (2Chron 26:17-18)
4. Pharaoh’s magicians “…could not stand before Moses…” (Ex 9:11) but they opposed him.

SUMMARY:
1. Jannes and Jambres were men of Israel
2. Paul’s last letter to Timothy was to warn him about openly defiant men in the church that will not be followers of Paul and will not have “… my doctrine, manner of life, purpose, faith, longsuffering, charity, patience.” (2Tim 3:10).
3. As Paul clearly states in his letter to the Galatians, they are men who “SEEM TO SOMEWHAT!”
They were puffed up with self-importance! “But of these who seemed to be somewhat, (whatsoever they were, it maketh no matter to me: God accepteth no man's person:) for they who seemed to be somewhat in conference added nothing to me:” (Gal 2:6)
4. Furthermore, Paul was exposing their heretical doctrines (1Cor 11:19; 2Pet 2:1) as “...their folly shall be manifest unto all men…”. They were fools.