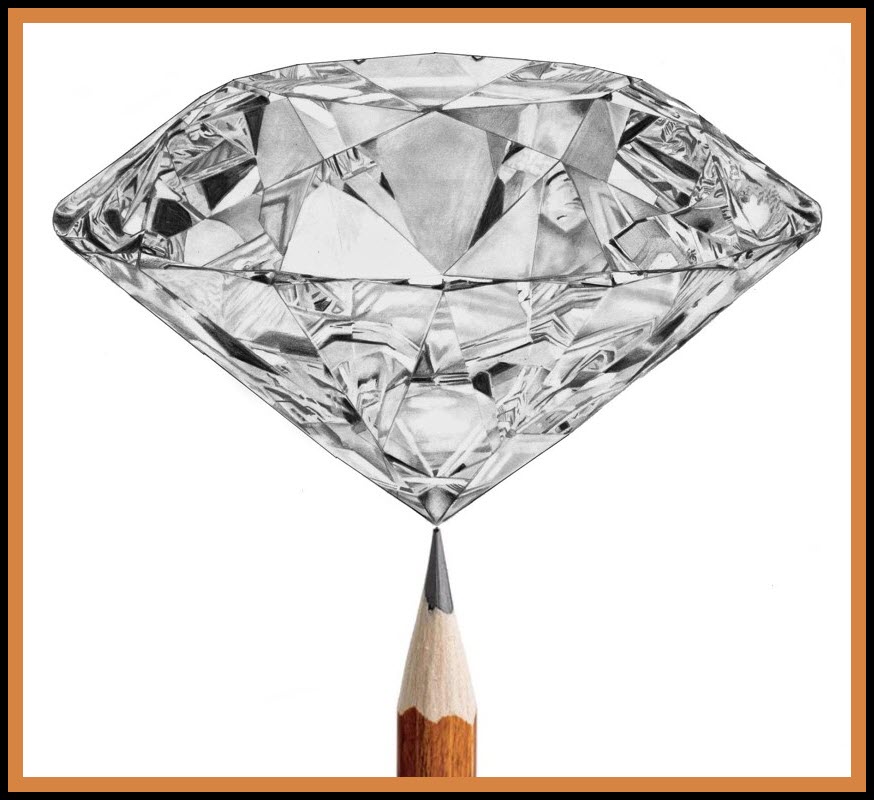 QUESTION: “WHAT’S THE DIFFERENCE BETWEEN A PENCIL AND A DIAMOND?”

ANSWER: “NOTHING EXCEPT PRESSURE AND HEAT”

The substance of graphite (the lead in a pencil) when subject to extreme heat and pressure changes into diamond.

Apparently both substances are pure carbon atoms that are simply arranged differently.

Graphite has layers of carbon atoms laid on top of one another like the sheets of a ream of paper. Just as you can slide the sheets off each other, this is why graphite seems soft and slippery like lead in a pencil.

You can also get graphite powder as a dry lubricant for surfaces that stick together like door hinges and sliding metal window frames.

Diamonds also have carbons atoms but are inter-connected with each other - like the honey comb you get from a beehive. This makes diamonds to be one of the hardest substances on earth.

Another example, for those with an architectural mind, is the geodesic dome which has a similar structure and is also very strong.

SO WHAT’S YOUR POINT?
When the Lord Jesus Christ, God himself, created the universe, his creation reflected who he was. He was giving man visual and obvious clues as to his nature.

GET TO THE POINT! JESUS? GRAPHITE? DIAMOND?
Well, Jesus, the ‘diamond’ in heaven, comes to earth as a piece of ‘graphite’ but after the cross he turns back into a ‘diamond’.

In heaven he is God, he is ‘immoveable’ as it were, and is indeed, represented as a diamond in the ephod, the breastplate of judgment (Ex 28:15, 18).

However on earth he is kind, loving and forgiving to Israel. He seems more soft and malleable, like pencil lead, and even on the cross he’s is still that. As the scriptures say

Who, being in the form of God, (PRECIOUS DIAMOND) thought it not robbery to be equal with God (DIAMOND): But made himself of no reputation, (WORTHLESS GRAPHITE) and took upon him the form of a servant, (GRAPHITE) and was made in the likeness of men (GRAPHITE): And being found in fashion as a man (GRAPHITE), he humbled himself, and became obedient unto death, even the death of the cross. Philippians 2:6-8

Did you know, Dear Reader, another name for a diamond is ‘a rock’ according to common speech. Have you ever heard the phrase “That’s a nice rock you’ve got on your finger!”

Anyhow, Christ, the diamond in heaven, comes to earth in another form as graphite, while still being a diamond, before returning back into heaven again to assume his heavenly nature once more as a diamond. As the scriptures say

Wherefore God also hath highly exalted him, (RESTORED TO PRECIOUS DIAMOND STATUS) and given him a name which is above every name: Philippians 2:9

The two natures of Christ as the Son of God and the Son of man may be more understandable in the light of this analogy.

HAVE YOU GOT ANY OTHER EXAMPLES?

Scientists can’t work out, why and how light comes in both wave form and linear (straight line) particle form like bullets from a gun. That is, light is both wave and particle at the same time. It’s like atoms are gathered together that act as waves.

A very poor analogy would be flocks of birds flying in the sky – a lot of individuals (particles) moving in an undulating and ever-changing formation.

But are we to be surprised? Of course not. The following is the description of Jesus Christ

That was the true Light, which lighteth every man that cometh into the world. John 1:9.

SO CHRIST IS LIGHT BUT HOW HE IS BOTH WAVE FORM AND PARTICLE FORM?
He was the Son of man and the Son of God at the same time. He had two forms for the following reason:

He first came for the Jew as the Son of man.

He then returns to heaven for the Gentile, and indeed the Jew, as the Son of God.

SO WHAT’S THE DIFFERENCE? WAS CHRIST ON EARTH WAVE LIGHT OR PARTICLE LIGHT?
When Christ first came to earth as a holy thing (Luke 1:35), being overshadowed by the Holy Ghost (Luke 1:35), it was as if he was shot out of the Godhead (Col 2:9), and he was expressed (Heb 1:3) like a bullet. Bam! Straight into Mary. This was the particle form of Christ as it were.

In addition, when the Jews went to grab him in the temple, Christ somehow just ‘wafted off’ like a rubbery, wavy form that couldn’t be touched (John 8:59).
Put it this way, Christ passes through the wall of the upper room suddenly appearing unto his disciples (wave form) and then asks Thomas to touch him (particle form) (John 20:26-27).

Dear Reader, as you know, it is impossible to push, without breakage, a solid object through another. In coming through the upper room wall, Christ assumed another form.

Christ was both touchable and untouchable … both particle and wave form.

BUT HERE’S THE THING …
Now Christ is back in heaven, seated at the right hand of the Father, he has also left himself here on earth in the ‘wave’ form of the Holy Spirit.

I STILL DON’T UNDERSTAND?
The Holy Spirit is like the wind, as Christ explains to Nicodemus, that comes and goes, as in a ‘wave’ – sometimes soft, sometimes strong, sometimes high and sometimes low (John 3:8).

In mathematical terms this is similar to the curves of an undulating sine wave.

The Holy Spirit is God and Jesus is God. Both are God. While Christ now sits on the right hand of God the Father, he permanently dwells in Christians in the form of the Holy Ghost.

Of course, are we to be surprised, that Christ being the SECOND person of the Godhead would have TWO forms in the earthly creation (diamond and graphite), while his person also can be described in TWO forms (wave and particle).

Truly, truly, truly Dear Reader just be amazed … AND WE CAN NEVER FIGURE IT OUT!

He stretcheth out the north over the empty place, and hangeth the earth upon nothing. He bindeth up the waters in his thick clouds; and the cloud is not rent under them. He holdeth back the face of his throne, and spreadeth his cloud upon it. He hath compassed the waters with bounds, until the day and night come to an end. The pillars of heaven tremble and are astonished at his reproof. He divideth the sea with his power, and by his understanding he smiteth through the proud. By his spirit he hath garnished the heavens; his hand hath formed the crooked serpent. Lo, these are parts of his ways: but how little a portion is heard of him? but the thunder of his power who can understand? Job 26:7-14

O the depth of the riches both of the wisdom and knowledge of God! how unsearchable are his judgments, and his ways past finding out! For who hath known the mind of the Lord? or who hath been his counsellor? … Romans 11:33-34