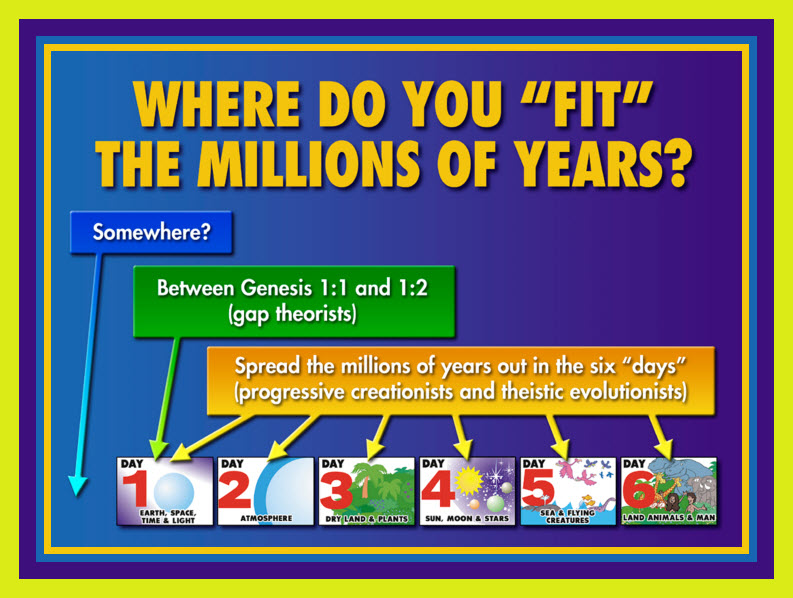 What is the history of the Gap Theory?

“What is the history of the Gap Theory?

Prior to Thomas Chalmers inventing the Gap Theory around 1814, the “…oppositions of science falsely so called:” (1Tim 6:20) were already raising their ugly heads.

You see, twenty years earlier, a concept called ‘uniformitarianism’ first emerged in a book written by James Hutton in 1795. He believed that since the earth came into being, everything had been uniform in its development, such that things like the earth’s sediments being laid down, the climate and decay, occurred at an even rate as observed today.

Studying the present rates of decay and sedimentation, he believed, would be the key to the past.

As such, Hutton’s godless beliefs laid the foundation for evolution and present day geology and the rise of satanic philosophies of humanism, Nazism with its pure racist theory, and communism.

Because he refused to believe the account of a literal six day creation as written in the Authorized Bible, the King James, his false belief has been the cause of countless millions of deaths in the last two hundred years.

Hot on his heels, the man credited with being ‘the father’ of modern geology, Charles Lyell, incorporated much of Hutton’s work into his own, such that the principle of uniformitarianism was the impetus provided for modern geological studies.

Now contrary to the known and proven fact that layers of sediment are deposited by moving water, a few early geologists also assumed that these layers could have been slowly deposited over millions of years at the same rate as is evidenced by a glass of standing muddy water.

Using this slow rate of deposit and the principle of uniformitarianism, geologists

called into question the age of the earth. You see, for hundreds of years, people worked off the Bible premise of a 6,000 year old earth, but now, they were able to expand that time frame with the help of a slow rate of sedimentary deposition.

As a result of this ‘scientific’ breakthrough, many Christians, including Thomas Chalmers, knew their Christian belief based on the Bible of a six day old creation, was under attack.

Jumping on the band-wagon, some geologists and theologians, changed their belief, knowing full well, that this new ‘truth’ of uniformitarianism and the deposit of sediment layers, required millions of years. However, God’s time table was adjusted to include the new theory.

And this is how the problem for Thomas Chalmers began, and indeed for many other Christians at the time. They looked for a way to bring two opposite sides together – the six day old creation with the seemingly undeniable ‘truth’ of uniformitarian geology. He did this with the gap theory – but he had help.

The originator of this Gap Theory in 1814, Thomas Chalmers, a university science lecturer and, the then, Scottish Presbyterian Moderator (and who better than a saved man to be satan’s dupe), was a Freemason and a religious Gnostic who was well versed with the Freemasonry beliefs of Hindu Cosmic cycles.

In fact all religions, other than Christianity, promote the multiple ‘ruin-reconstruction cycles’ of the earth – as evidenced by the latest Mayan fiasco concerning December 2012.

That’s why God got Moses to counteract this pagan belief, by writing the straight forward and linear account of creation.

No chaos and no re-creation!

Thomas Chalmers, while struggling to marry the newly ‘accepted’ and overwhelming tsunami of the ‘truths’ of evolution in the mid 1800’s, with a literal six day creation, ‘an angel of light’ (2Cor 11:14), appeared and gave him a hand.

the second verse down a little and pop me

in the gap if you wouldn’t mind. Look, I

don’t mind the bad publicity, as long as

I can get people to doubt God’s infallible, inerrant, inspired scriptures – you know

Now a man called Charles Darwin appears on the scene 45 years after Chalmers Gap Theory, and he publishes a book in 1859 called “Origin of Species”. In it, he enthralled his public, and other scientists, with the notion that more than a few million of years were needed between Gen 1:1 and Gen 1:2, and indeed, there was room for any length of time.

Uncertain about what to believe, more than a few Christians and theologians, uncomfortable about accepting the ‘scientific’ theories of Darwinian evolution that opposed the six day Genesis account, started coming up with the Genesis days that were much longer in length than twenty four hours.

In 1909, the Gap theory got tremendous support through the works of a Cyrus I. Scofield and his Study Bible. He whole-heartedly swallowed the Gap Theory by saying “no conflict of science with the Genesis cosmogony remains.” For him, God’s first creative act was in the dateless past and thereby gave scope for all geological ages.

However, God saw to it, that he put his foot in it, by stating that the six days of creation were not twenty-four hour days, but were actually really long periods of time.

Nine years later in 1918, a Clarence Larkin published a very popular book detailing the existence of a ruined, destroyed and chaotic earth between Gen 1:1 and Gen 1:2. In his wanting to be thought of, not only as a deep theologian, but indeed, a modern scientific thinker, he allowed evolutionary science to infect his thinking.

As with Scofield, God trips him up by getting him to also believe the theory of Nebular Hypothesis whereby the Solar System was formed from collapsing clouds of dust and gas.

In 1963, a modern gappist, Finnis Dake, produces his weighty tome called the “Annotated Reference Bible” in which he outlines on many pages the glories of a pre-Adamic race of ‘men’.

The baton changes hands to a Dr Ruckman, who in 1969 publishes “The Book of Genesis – The Bible Believers Commentary Series” in which he also promotes the Gap Theory.

Other well meaning Christians believe the Gap Theory including Billy Graham, who once believed that the Roman Catholic church was a stench in the nostrils of God. However, years later, he changed his tune to “The Pope is the greatest living Christian on earth.”

There are six types of gappists:

1.  Many gappists arrive at their conclusion that the Gap Theory must exist because of their pre-conceived idea that the earth is billions of years old.

2.  Others have a scientific mindset such that uniformitarianism has a strong hold and they need the Gap Theory to maintain a Bible framework they’ve developed over many years and it’s hard for them to change.

3.  Others simply trot out the line that their Bible College taught.

4.  Others because of a reason known only to them, hold onto the Theory even though they know it’s wrong – a sort of a “holding the truth in unrighteousness”.

5.  Some are in the middle and still have an open mind.

6.  Others have adapted one or more of the variations of the theory that are going around

The acceptance of any combination of the following will allow Christians to agree with everybody - and this is exactly what the ecumenical movement wants.

“At least we have some common ground to work on” they say.