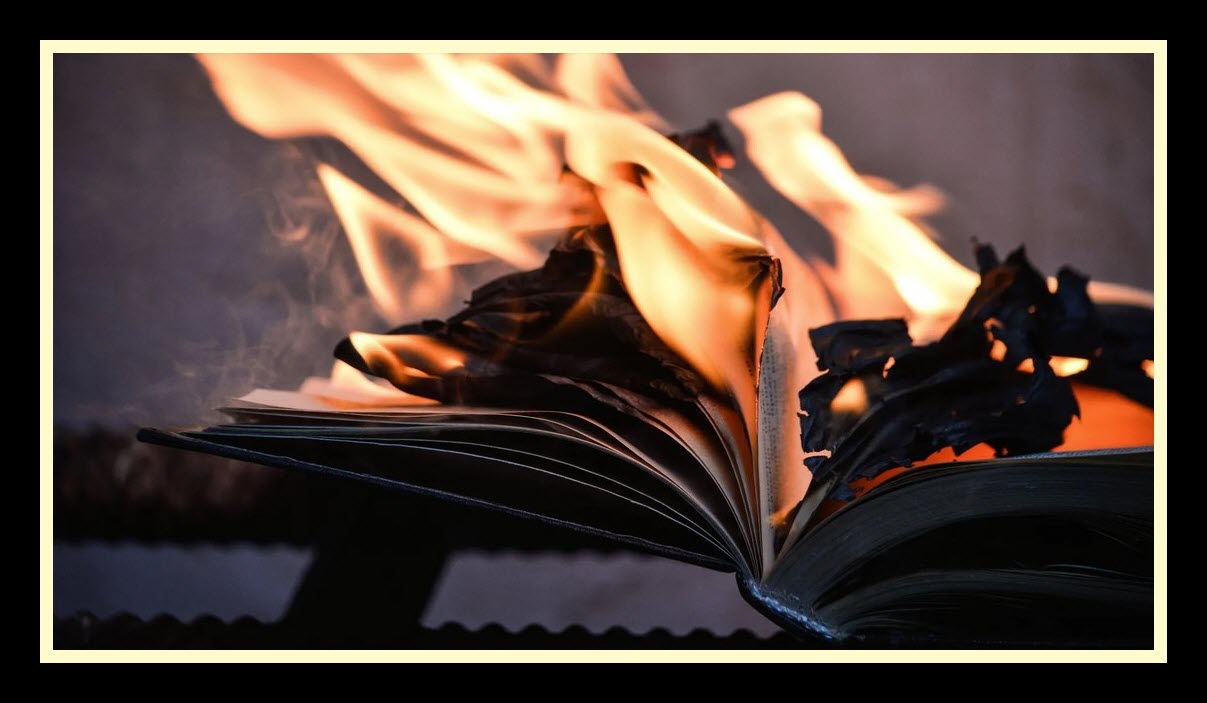 “THE MAN WHO CUT AND BURNT HIS BIBLE”

It’s amazing isn’t it … how the New King James Version (NKJV) user joins the chorus of condemnation of Jehoiakim, the king of Judah, who cut up and burnt the scriptures (Jeremiah 36:20-32)

There’s a scripture for them as follows …

“Who knowing the judgment of God, that they which commit such things are worthy of death, not only do the same, but have pleasure in them that do them.”
(Romans 1:32)Now Dear Reader, with all Christian charity, there are those who are just plain ignorant (Psalm 73:22) in the true sense of the word, just dumb as doorknobs, and always will be, and those who, having been given the truth, are willingly ignorant (2 Peter 3:5) … both groups are found in the NKJV crowd. They are like those in Malachi, “The Wherein Crowd” (Malachi 1:6; 1:7; 2:17; 3:8) … the humble but proud arrogant, as they despise, weary and pollute God and his name … robbing him of spiritual offerings and his honour (Malachi 1:6)And knowing the following scriptures, they even re-double their efforts to demonstrate … wait for it … Shock! Horror! … that they are the unwitting dupes of the Pope … Shavelings of the ‘Mother Church’ … Satan’s Little Helpers.“And if any man shall take away from the words of the book of this prophecy, God shall take away his part out of the book of life, and out of the holy city, and from the things which are written in this book.” (Revelation 22:19)“Add thou not unto his words, lest he reprove thee, and thou be found a liar.” (Proverbs 30:6)
“To the law and to the testimony: if they speak not according to this word, it is because there is no light in them.” (Isaiah 8:20)
“Thus saith the LORD; Stand in the court of the LORD'S house, and speak unto all the cities of Judah, which come to worship in the LORD'S house, all the words that I command thee to speak unto them; diminish not a word:” (Jeremiah 26:2)Are you robbing, wearying, despising and polluting God and his name by using the New King James Version?Now Dear Reader, there’s a lot of self-harming around today … but Christians don’t realize the God-harming they are committing with Rome’s NKJV.  Yes, Dear Reader, it is that serious.

We at Australian Bible Ministries don’t worry about the other obviously stupid versions of the Bible, over 300 of them, as they are too ridiculous for words to be wasted upon … only Satan’s version for the Christian … the NKJV!
Dear Reader, please CLICK ON THE FOLLOWING ARTICLES to see what we mean, and how Rome’s New King James Version cuts and burns the true, infallible, inspired, inerrant and perfect words of God of The King James Bible aka The Authorized Bible aka the Holy Scriptures.