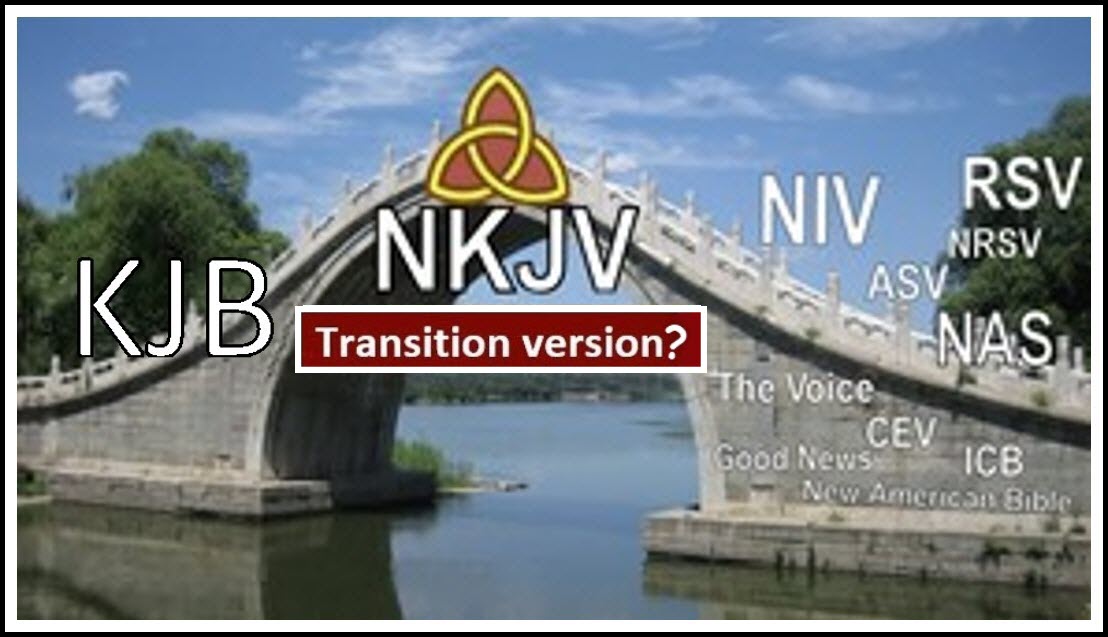 Dear Christian, why would you

“Why Would You Prefer the NKJV?”

SHAMEFUL FACT #1 The NKJV is solidly based upon the works of two Jew hating Germans, Rudolf Kittel (1853-1937) and his son Gerhard (1888-1948). Firstly, the pre-Nazi Rudolf, cast aside the traditional Old Testament Hebrew text of the Ben Chayim Masoretic, and replaced it with the utterly corrupt Biblica Hebraica.

Imitating his father, Gerhard the Nazi son, finished off the destruction of the Authorized Bible (AB), also known as The King James Bible, with his ten volume revision of New Testament words and their meanings, called “The Theological Dictionary of the New Testament”.

Backed by Rome, Gerhard’s revision established the solid ‘Christian’ base needed for Hitler’s hateful and murderous anti-semiticism, thereby making the extermination of the Jews theologically respectable. Despite Gerhard being hired by Hitler to curse the Jew, and being tried, convicted and imprisoned for war crimes, the modern Bible scholar still salivates to obtain Gerhard’s works.

SHAMEFUL FACT #2 The NKJV looks the same as the Authorized Bible (AB) despite the fact it’s not. For this reason it contains the deadliest poison of any ‘bible’. The editors have deceived the body of Christ by stating 1. It’s a King James Bible (which is a lie) 2. It follows the Textus Receptus (also a lie), as the NJKV ignores the TR over 1,200 times!

SHAMEFUL FACT #3 (Luke 7:19) The NKJV is preferred by the New Age Movement and the occultists, who, instead of looking for Jesus (AB), are looking for the Coming One (NKJV) called Lord Maitreya. A highly reverenced mantra chanted by New Agers to invoke the Lord Maitreya is “Let Light, Love, Power and Death, Fulfil the purpose of The Coming One”.

SHAMEFUL FACT #4 The NKJV has removed 2,289 words from the AB’s New Testament alone, and made changes over 100,000 words. This comes to over 80 changes per page and 3 changes per verse, thereby matching Rome’s ‘bible’.

In addition, a large number of these changes agree with the Alexandrian perversions of the NIV and the RSV. Furthermore, footnotes make references to the Westcott and Hort Greek text.

SHAMEFUL FACT #5 The NKJV copyrights the words of man. The text of the Authorized Bible (AB), the King James, has no copyright. Why? God’s words are not to be copyrighted. Free to all.

"The publishers can copyright maps, charts and tables, but they can't copyright the actual text."

SHAMEFUL FACT #7 The NKJV is marked with the 666 symbol of Satanism and the occult - the intertwining 6’s. Being a symbol of the pagan trinity of the ancient Egyptian mysteries, it was also used by the Satanist Aleister Crowley, along with the rock group Led Zeppelin.

SHAMEFUL FACT #9 (James 5:16) The (AB) has confess your faults not confess your trespasses (NKJV), thereby endorsing Rome’s priests in the confessional box.

SHAMEFUL FACT #10 (Deuteronomy 23:17) Sodomites hate the fact that their particular sin met with brimstone and fire (Genesis 19:24). No wonder they violently detest the Authorized Bible (AB) which calls them for what they are - wicked and sinners before the Lord exceedingly (Genesis 13:13). The title of perverted ones (NKJV 1 Kings 14:24) gives them anonymity and just calls them exceedingly wicked and sinful (NKJV) but not sinners (AB). Can you see Satan’s subtle and deadly handiwork of word rearrangement?

SHAMEFUL FACT #11 (2 Timothy 2:15) With the NKJV, you only have to be diligent (NKJV). This is the lazy man’s Bible for those who don’t like to study to show thyself approved (AB).

SHAMEFUL FACT #12 (Daniel 3:25) The NKJV footnote has Jesus as any old son of the gods but not the Son of God (AB) protecting Shadrach.

SHAMEFUL FACT #14 (John 1:3) The NKJV downgrades Jesus, with all things being made through him (NKJV) and not by him (AB). No wonder the Christadelphians, JW’s and Mormons prefer the NKJV?

(1 Corinthians 1:18)  (1 Corinthians 2:15) The NKJV has salvation as an ongoing process of being saved (NKJV) which suits Rome, as they believe that no-one can know they are saved (AB). Popes just love the NKJV as it keeps the money rolling in.
Also, in Hebrews 10:14, the words are sanctified (AB) are replaced with Rome’s words of are being sanctified (NKJV), and in 1 John 5:13, the words may believe (AB) are replaced with may continue to believe (NKJV).

SHAMEFUL FACT #16 (Luke 16:23) The NKJV has the rich man in hades and not hell (AB). In the New Age, Hades is an intermediate state of purification and not the final punishment of hell. Does this sound similar to Rome’s purgatory?

SHAMEFUL FACT #17 (1 Timothy 6:10) The love of money is the root of all evil (AB) not a root of all kinds of evil (NKJV). Yes, the NKJV editors had to change this verse to disguise their love of money coming from a new ‘bible’ on the market.

SHAMEFUL FACT #18 (1Timothy 6:5) God says withdraw from ‘the prosperity crowd’ who suppose that their gain is a result of their godliness (AB) eg attendances, big buildings and increased income. The NKJV lets these people off the hook as it focuses on those who would ‘fleece their flocks’ - to whom godliness is a means of gain (NKJV).

SHAMEFUL FACT #19 (Titus 3:10) The NKJV can reject a man for being divisive (NKJV), and not necessarily being a heretic (AB). Heresy is about doctrine while division can be about anything.

SHAMEFUL FACT #20 (2 Corinthians 2:17) Because the NKJV editors were corrupting (AB) the word of God, this had to be changed to the lesser sin of peddling (NKJV) the word of God.

SHAMEFUL FACT #21 (2Corinthians 10:5) The NKJV uses the word “arguments” not “imaginations” (AB). With the New Age ‘imaging’ and ‘visualization’ techniques entering the church, wouldn’t “casting down arguments” be preferred?

SHAMEFUL FACT #22 (Genesis 2:18) Hilary Clinton prefers the NKJV, as she can be a helper comparable to him rather than a help, meet for him (AB). We wonder why?

SHAMEFUL FACT #23 (Matthew 7:14) Rome loves to think that getting into heaven is difficult (NKJV) but not narrow (AB). What’s difficult about “Believe on the Lord Jesus Christ and thou shalt be saved” (Acts 16:31)? It’s narrow but not difficult!

SHAMEFUL FACT #24 (Matthew 20:20) Satan prefers the NKJV with the mother of Zebedee’s children kneeling down (NKJV) rather than worshipping him (AB).

SHAMEFUL FACT #27 (2 Corinthians 2:10) The NKJV downgrades the person of Jesus (AB) to a mere presence (NKJV).

Scores of other easy words are also changed.

SHAMEFUL FACT #32 (John 4:24) The NKJV has God is spirit (NKJV) with its impersonal, New Age and pantheistic meaning, and not God is a spirit (AB). Buddhists prefer the NKJV as they hate the fact that God is a single, particular spirit and not to be confused with any of their spirits.

SHAMEFUL FACT #34 (Philippians 3:8) The NKJV appeals to the sensitive new age guy as the NKJV has rubbish instead of dung (AB).

SHAMEFUL FACT #35 (1 Timothy 6:20) The oppositions of science (AB) is changed to contradictions of knowledge (NKJV). Sciences falsely so called (AB) include evolution climate change and global warming and the list goes on.

SHAMEFUL FACT #36 (2 Peter 2:1) The NKJV has teachers with destructive heresies (NKJV) but not damnable ones (AB). Vast difference.

In addition, Jesus (AB) is omitted from Hebrews 4:8 and Acts 7:45 to destroy the truth that it was actually Jesus, not Joshua (NKJV), who led Israel to the land and gave them rest.

CONCLUSION: Dear Reader, if a cook loves cooking and a sailor loves sailing, doesn’t it make sense that THE WORD LOVES HIS WORDS and the EXACTNESS of them. It stands to reason, that if there is only one God, then there is only one PURIFIED, PRESERVED and HOLY BIBLE. As we‘ve seen, Rome, the cults and the world, prefer the NKJV’s opposite meanings, lies, replaced words and deceitful manipulations. God’s Spirit hovers over God’s words in the Authorized Bible, The King James Bible, and not Rome’s NKJV. God hates mixtures.

The words of the LORD are PURE words: as silver tried in a furnace of earth, PURIFIED seven times. Thou shalt keep them, O LORD, thou shalt preserve them from this generation for ever. (Psalms 12: 6-7)