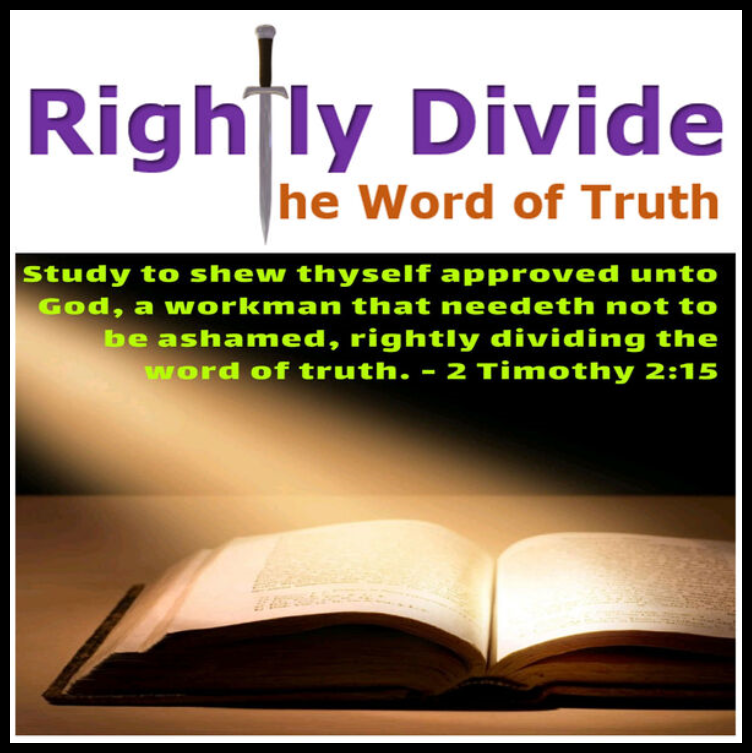 They hop, skip and jump through it once or twice and then ‘throw it in the bin’. Perhaps they leave their Bible on a shelf somewhere because it makes them feel spiritual. “Oh, I read the Bible when I was eight years old but it didn’t do me any good. Now, I do what I want and what makes me feel good. But I have to tell you man, it’s wearing me out! I’m getting so depressed, life is losing its taste, I want to kill myself! But I’m looking at going on a spiritual retreat and doing some more travel. I think I’ll have to lose myself to find myself.”

Mmmm! Yeh right! Their motto is “Your truth is not necessarily my truth.” It sounds clever doesn’t it? And of course it totally contradicts what Christ said I am the way, the truth, and the life: no man cometh unto the Father, but by me. John 14:6. Another clever saying of theirs is “There is no such thing as absolute truth” not realising they have just contradicted themselves with an absolute statement about their truth.

Here’s their problem. The Bible is the only book that you must know the author personally to understand it. It’s not a novel. A lot of people who call themselves Christians are not Christians. There are two groups of unsaved people – those that deny sin exists and those that take the wrong option of wanting to be like Jesus and follow him. But they won’t have him as their Saviour!

Most people just see the Bible as another book of self-improvement or a guide on how to be kinder to others. Nothing could be further from the truth. The real reason that people don’t like the Bible is that the Bible ‘doesn’t like them’. The Bible is totally against all the modern day psychology and popular self-help books that say “In order to become a better person, you must eliminate negative thoughts about yourself”. No, the Bible calls them sinners. The problem for people is not lack of self-esteem. No. Everyone has too much self-esteem. Everyone thinks too highly of themselves already. This is why people end up in jail. The laws of society don’t apply to them and stop them being who they want to be. Laws inhibit and constrict them.

There are two ‘MUST HAVES’ to understanding the Bible.

1. You must be saved 2. You must not only use the King James Bible but you must believe it.

If God had wanted us to use the Greek or Hebrew, he would have let Greece or Israel rule the world. But he didn’t. He chose England. As it is said “The sun never set on the British Empire.” This means wherever the sun was shining on the earth, Britain was ruling a colony there. Why? He wanted all the races of the world to learn English so they could read his perfect Bible in the English language. As stated “The Authorized Bible, also known as The King James Bible, is perfect, infallible, inerrant and inspired.”

“What if I don’t speak English?”

Answer: “Do the best you can with the language translation you have.” Just remember though, the whole world wants to learn English. Why? International business and commerce is conducted in English (not Chinese yet, or Russian or Spanish). People don’t realise that God has made the international language to be English. Why? It’s not about business or commerce, but about God blessing man in being able to study his perfect words in the perfect language called English. The whole world spends a lot of money learning English, and they don’t really know why. God does.

English is the unique language

English is not like any other language, in that, it is a mixture of all other languages that use ‘letters’ to make up their words. Remember back at school you learnt that the Angles, Saxons and the Jutes with their primitive European languages, invaded England, and these formed the basis of the English language. These are all the European languages of French, German, Spanish, Dutch and so on.

Now, Europe is where Noah’s son Japheth went. These are not the African languages of Ham or the Semite languages of Shem, that is of the Arabs or the Jews. The English King James Bible is the perfect Bible to which all other languages must go back to and refer.

The English language is far superior to the Greek or the Hebrew.

Let me give you a well known story about Richard Kilbye – one of the King James Bible translators. Richard Kilbye, one of the translators, attended a church service where the young preacher used most of the time allotted to show how a particular English word had been mistranslated and gave three reasons in support of his stance. He had been studying the Greek. Later, Dr Kilbye, explained to the preacher why the King James Bible’s choice of words was correct and gave him thirteen more weighty reasons for the particular wording.

There are three things about the English King James Bible

Why? God gave the Jews all the laws to keep in the Books of Leviticus and Deuteronomy. Read these books and you will see endless laws (about 619 of them), feasts, holy days, sacrifices and so on. Will I be keeping those? No. Will I be getting circumcised so that I may go to heaven? No. Why? In a nutshell, Christ fulfilled the Old Testament laws perfectly, so I don’t have to for my salvation. However, when you are saved, you are now under ‘Christian laws’ of right and wrong. God will take you back to his commandments, and these are found in Paul’s books. There are lots and lots of them. Furthermore, the Ten Commandments are re-stated and ‘re-worded’, minus number 4 about keeping the Sabbath, for the Christian in the Books of Colossians and Ephesians. Paul says If any man think himself to be a prophet, or spiritual, let him acknowledge that the things that I write unto you are the commandments of the Lord. 1 Corinthians 14:37.

“What about the Book of Revelation?” you say “surely this can’t be called historical fact!!?”

Incorrect. This is history alright. It’s future history. It’s called prophecy. It’s called history in advance. The book is not hard to understand, it just hard to believe. All the events foretold are more sure than gravity. But you do not want to be here in the Tribulation to prove them - do you?

“What about Song of Solomon?

“Isn’t it just some poetry about husband and wife?”

No. The Song of Solomon is the book that the Jews recite every Feast of the Passover. And they don’t have a clue why they do it. This book outlines Christ’s future love for Israel. Christ, the faithful and unknown shepherd of the story, waits and waits for Israel, the black Shulamite woman (Song of Solomon 1:6). She is not a virgin (Song of Solomon 1:6), and symbolizes Israel’s fornication with the many lovers of the surrounding heathen nations with their evil religions. She is being tempted once again to join the harem of a very powerful king, but she keeps resisting the offer. She is eventually taken away by the shepherd. This will be Christ in the Tribulation when Israel’s eyes will be opened (Zechariah 12:10). Isn’t it amazing, that God would have the Christ rejecting Israel rehearse this story every year?

God has put a persistent spiritual ‘thirst’ into Israel and she doesn’t know what it is. Deep down she longs for Christ. In the interim, Christ, the humble and unknown shepherd, waits for his beloved (Israel) with true love. Christ is their true Passover who they haven’t recognized yet. In many ways, Christ is like a Hosea who knowingly took a prostitute for a wife.

God wants us to study

God has written down Study to shew thyself approved unto God, a workman that needeth not to be ashamed, rightly dividing the word of truth. 2 Timothy 2:15.

5. Will you RIGHTLY DIVIDE the Bible, the word of truth, into it’s proper sections? Yes!

People will not rightly divide the word of truth (2 Timothy 2:15). They are taking a truth meant for another time and mis-applying it to today. As it is said “The Bible has probably sent more people to hell then any other book.” Can you believe it? People go to hell for believing the truth. IT WAS JUST THE WRONG TRUTH! Put it this way, all heresies are truths. They are truths for another time.

There is a big word called DISPENSATIONS. God has dispensed and given out different sets of rules and instructions for different groups of people at different times since creation. More on that later.

We are to work! Study is a work! Work involves effort! Work is not merely reading the Bible! To pass an exam you stay up late and put in the effort! Work is not reading a verse, feeling spiritual, then dropping off to sleep! The King James Bible is the only one with the word ‘study’. All the other versions read “do your best” or “have a go” and so on.  When studying the Bible, say this prayer “Lord, I don’t understand this bit, but I know it’s true. Please show me. I won’t change a word or meaning. I want the truth, all of the truth and nothing but the truth - at any cost.” If this is your aim, God will bless you. You’ll be accused of having a closed mind. That’s for me brothers and sisters! Closed and rusted onto the Lord’s truth.